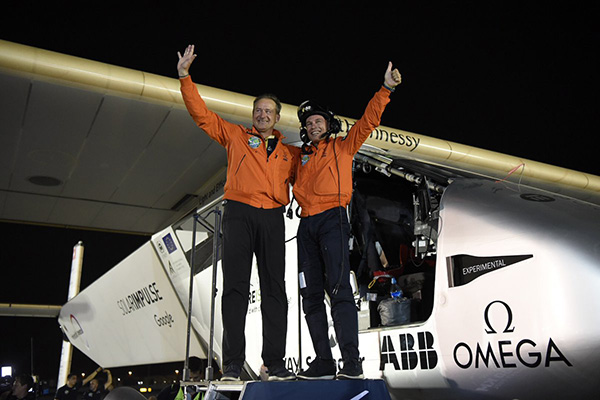 (P1) Only one year after it first took flight, a solar-powered plane has completed an epic around-the-world trip without burning a single drop of fuel.

(P2) The revolutionary zero-fuel aircraft, Solar Impulse 2, is piloted by Swiss engineer and businessman André Borschberg and Swiss psychiatrist and aeronaut Bertrand Piccard. The two have been developing the plane for over a decade to promote clean technologies.

(P3) The Solar Impulse 2 touched down Tuesday morning in Abu Dhabi, at the same airport where it embarked back in March 2015.

(P5) “We have traveled 40,000 kilometers without fuel. Now it’s your turn to take it further,” Piccard said. “We have enough solutions, enough technologies. We should never accept the world to be polluted only because people are scared to think in another way. The future is clean, the future is you, and the future is now.”

(P6) The Huffington Post reports, “The aircraft is made mostly of carbon fiber and is powered by 17,248 solar cells attached to its wings, which recharge four lithium polymer batteries. Despite its 236-foot wingspan, it weighs roughly the same as a Ford Explorer and nearly 200 times lighter than a Boeing 747. It reaches a top speed of 90 mph.”

Verizon to Buy Yahoo for $4.8B

Business, Weekly_ArticleAugust 3, 2016
[Business ★★★] (P1) Verizon will acquire Yahoo, once valued at more than $125 billion, for $4.8 billion, a source tells the Wall Street Journal. An official announcement of the deal, which will end an auction process that began five months ago, is …
END_OF_DOCUMENT_TOKEN_TO_BE_REPLACED 1

Weekly_ArticleAugust 22, 2015
[SPORTS ★] GREEN BAY PACKERS ANNOUNCE PLANS FOR ENTERTAINMENT DISTRICT (P1) The Green Bay Packers are a moneymaking machine. (P2) Over the past four FISCAL YEARS, the Packers have cleared a net income of $140.3 million. (P3) But as team president …
END_OF_DOCUMENT_TOKEN_TO_BE_REPLACED 1

Weekly_ArticleJune 29, 2016
[Animals ★] (P1) Richmond is in Virginia, USA. It is the state’s capital. (P2) The zoo in Richmond has two new animals. They are baby snow leopards. They are one month old. They do not have names. Their mother takes very good care of them. …
END_OF_DOCUMENT_TOKEN_TO_BE_REPLACED 1

Technology, Weekly_ArticleJuly 25, 2015
[TECHNOLOGY ★★] THIS PLANET IS THE CLOSEST THING TO EARTH YET (P1) NASA announced on Thursday that it has found the first near-Earth-size planet orbiting in the HABITABLE zone of a star that is similar to our own sun. (P2) Scientists don’t …
END_OF_DOCUMENT_TOKEN_TO_BE_REPLACED 1