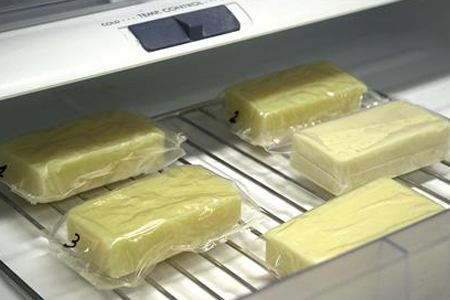 (P1) A biodegradable film made of milk protein has been invented, according to the U.S. Department of Agriculture (USDA) on Aug. 21.

(P2) The film is a mixture of a milk protein called casein and citrus pectin. Pectin is a substance that turns fruits into jams and jellies.

(P3) The film looks like a normal plastic wrap. But it is less sticky and even edible.

(P4) “The purpose was to make a packaging that had zero waste,” Bonnaillie, a research chemical engineer with the USDA, told CBC News.

(P5) The film is safer, stronger and much more resistant to moisture than a plastic wrap.

(P6) A small company in Texas plans to sell the new film within the next three years.

(P7) But there are drawbacks on the new product as some question whether the product is necessary.

(P8) “I doubt whether it is ethical to use milk to make food wrap while there are more than two billion people around the world that are starving,” says Lee Deok-hwan, a Professor in Sogang University’s Department of Chemistry.

Weekly_ArticleAugust 23, 2016
[World News ★★★] (P1) Germany doesn’t want its citizens to panic—but it would like them to be a little more prepared for an attack or a disaster. According to a report in the Frankfurter Allgemeine Sonntagszeitung, the German government plans to bring …
END_OF_DOCUMENT_TOKEN_TO_BE_REPLACED 1

Q&A, UncategorizedJanuary 11, 2020
We use these expressions in speaking to indicate when someone or something is given or presented to you. In particular, “here/there you go” is more commonly used to indicate objects or abstract ideas. “Here” indicates when something is presented at …
END_OF_DOCUMENT_TOKEN_TO_BE_REPLACED

Role PlayNovember 11, 2015
Scenario Student: Your coworker is in danger of getting fired due to poor performance (showing up late, not finishing his/her work on time, having a bad attitude).  He/she will ask for your advice on how to improve. Tutor: Your manager has made …
END_OF_DOCUMENT_TOKEN_TO_BE_REPLACED

Business, Weekly_ArticleNovember 4, 2014
Comment [Business ★] Almost 30% of employees fake an illness and skip work (P1) When your employees call in sick, there’s a good chance they aren’t really under the weather at all, new research finds. (P2) Nearly 30% of workers …
END_OF_DOCUMENT_TOKEN_TO_BE_REPLACED