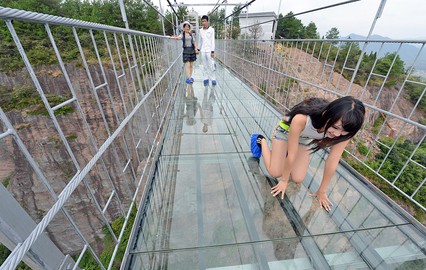 (P2) Haohan Qiao, as it’s known in Chinese, is the latest in a series of glass-floored attractions to open in China and the rest of the world.

(P3) Despite its terror-inducing appearance, its creators say the bridge in the Shiniuzhai National Geological Park is perfectly safe. Each of the glass panes is 24 millimeters thick and 25 times stronger than normal glass.

(P4) “The bridge we build will stand firm even if tourists are jumping on it,” a worker who constructed the bridge told the state-owned China News Service. “The steel frame used to support and encase the glass bridge is also very strong and densely built, so even if a glass is broken, travelers won’t fall through.”

(P5) Haohan Qiao was originally a wooden bridge before the park experimented by replacing a small section with glass in 2014. It decided to increase the thrill by revamping the whole overpass earlier this year, making it China’s first all-glass suspension bridge.

(P6) Hunan is due to open another glass bridge later this year in the Zhangjiajie Grand Canyon area, about 300 kilometers (186 miles) northwest of Shiniuzhai. When completed, the Zhangjiajie structure will be the world’s highest and longest glass bridge, 430 meters long and 300 meters high.

Rio Medalist Sells His Silver to Save Little Boy’s Sight

Weekly_ArticleAugust 31, 2016
[Sports ★★★] (P1) Poland’s Piotr Malachowski is no slouch at throwing the discus, but he appears to be even better at being an awesome human being. After winning a silver medal in Rio, the 31-year-old went home and put it …
END_OF_DOCUMENT_TOKEN_TO_BE_REPLACED 1

★★★★, Weekly_ArticleJune 9, 2016
[Travel ★★★★] (P1) An Air Canada passenger says a cramped 10-hour flight from Chile to Toronto in January has taken a serious toll on his otherwise impeccable health, and he wants the airline to “take a good hard look at what they’re …
END_OF_DOCUMENT_TOKEN_TO_BE_REPLACED

What are some ways I can talk to native speakers of English online?

Q&A, UncategorizedDecember 3, 2019
When you’re trying to identify online communities where you can work with fellow English-language learners, you should check their community rules. Strong, genuinely helpful groups will clearly state that they do not allow disrespectful language, discrimination, religious discussions, advertisements, etc. …
END_OF_DOCUMENT_TOKEN_TO_BE_REPLACED

WROCLAW IS 2016 EUROPEAN CAPITAL OF CULTURE

Weekly_ArticleJanuary 24, 2016
[CULTURE AND ENTERTAINMENT ★★] WROCLAW IS 2016 EUROPEAN CAPITAL OF CULTURE (P1) Combining a long Polish and German HERITAGE, Poland’s western city of Wroclaw becomes one of the European Capitals of Culture in 2016. (P2) Formerly known as Breslau and part …
END_OF_DOCUMENT_TOKEN_TO_BE_REPLACED 1