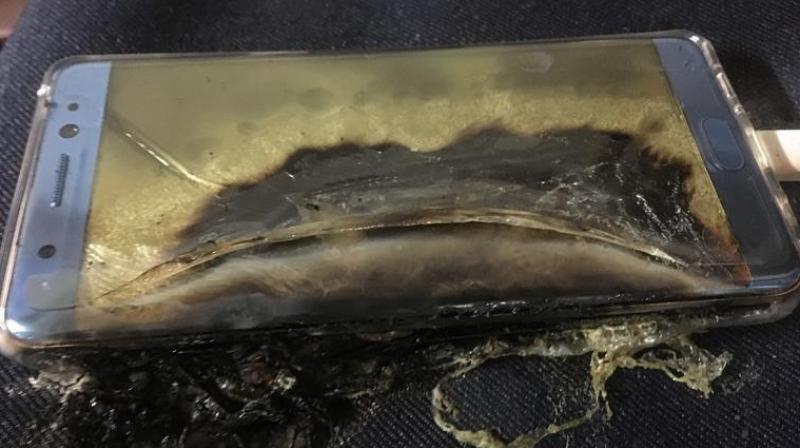 (P1) Samsung halted sales of the Galaxy Note 7 smartphone Friday after finding batteries of some of the devices exploded while they were charged.

(P2) Koh Dong-jin, president of Samsung’s mobile business, said customers who already bought Note 7s would be able to swap them for new smartphones, regardless of when they purchased them. Note 7 sales launched just two weeks ago.

(P3) Samsung issued its first global recall of the flagship smartphone because it has not found ways to specify exactly which phones may endanger the user. The smartphones are being yanked from shelves in 10 countries, including the U.S. and South Korea.

(P4) Koh said the company’s investigation found that a battery cell made by one of its two battery suppliers caused the phone to catch fire. He refused to name the battery supplier. “There was a tiny problem in the manufacturing process so it was very difficult to find out,” Koh told reporters at a news conference.

(P5) Some buyers reported their phones caught fire or exploded while charging, sharing the photos of scorched phones on social media. Samsung said it had confirmed 35 such cases in South Korea and overseas. There have been no reports of injuries related to the problem.

(P6) Samsung said it has sold more than 1 million Note 7 smartphones since the product’s Aug. 19 launch. It has manufactured about 2.5 million Note 7 phones so far, some of them still in inventory. Koh said they also would be returned and swapped with new ones.

(P7) The company estimated that it would take about two weeks to begin swapping old Note 7s for new phones.

(P8) China is not affected by the sales suspension. The company said it used a battery made by another supplier for the Note 7 sold in China.

Swimming with dolphins may be banned

Weekly_ArticleSeptember 9, 2016
[Travel ★★★] (P1) Hawaii might ban the tourist activity of swimming with dolphins. Dolphins have been a magnet for tourists over the past decades. However, officials say tourism harms the dolphins because they cannot rest or socialize. The National Marine …
END_OF_DOCUMENT_TOKEN_TO_BE_REPLACED 1

Weekly_ArticleApril 22, 2015
[Business ★★] Don’t Be a Mystery Boss. Give the New Team Your Management Playbook. [Business★★★] Mean People Fail [Thoughts★★★] Ferguson and Non-White America : Why Asian-Americans Should Care [Thoughts★★★] How Movies Trick Your Brain Into Empathizing With Characters [Life★] The …
END_OF_DOCUMENT_TOKEN_TO_BE_REPLACED

Business, Weekly_ArticleAugust 23, 2015
[BUSINESS ★] AMERICANS ARE WORKAHOLICS (P1) Checking emails at home is just part of the job for most Americans, who would also prefer to receive money rather than more paid vacation or sick days, according to a poll. (P2) More than …
END_OF_DOCUMENT_TOKEN_TO_BE_REPLACED 1