July was the hottest month in recorded history 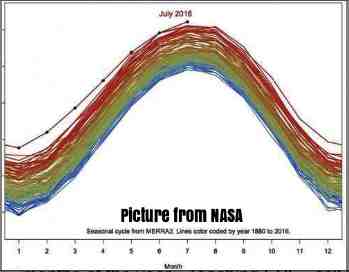 (P2) The website gizmodo.com said July could be the hottest month since prehistoric times, the hottest in 125,000 years. A weather expert said: “It’s a little alarming…that we’re going through these records like nothing this year.” The organization Climate Central reported that the record temperatures are because of fossil fuels and El Niño. However, an Australian politician recently said climate change was a conspiracy theory created by NASA.

Technology, Weekly_ArticleSeptember 9, 2016
[Technology ★★★] (P1) This year’s iPhone, revealed Wednesday, is seen as a more modest upgrade, as several analysts noted that it was increasingly difficult to make impressive changes in hardware, the AP reports. Among Apple’s biggest changes are nixing the headphone jack and …
END_OF_DOCUMENT_TOKEN_TO_BE_REPLACED 1

Business, Weekly_ArticleSeptember 27, 2015
[BUSINESS ★★] VOLKSWAGEN HAS A PROBLEM (P1) Volkswagen is confronted with a MONUMENTAL challenge. (P2) The company has admitted that 11 million of its cars used illegal software to cheat EMISSIONS STANDARDS. (P3) Now, many owners are demanding that the OFFENDING …
END_OF_DOCUMENT_TOKEN_TO_BE_REPLACED