Brown shoes could mean you fail a job interview 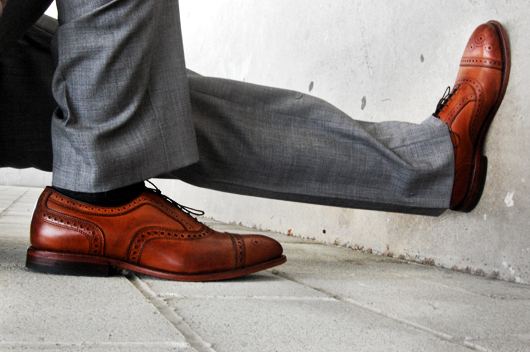 (P2) The report suggested that working class people had to change their behavior to fit in. One banker said: “I felt like my accent was a bit out of place, so I changed it.” The study said the industry discriminated against those who did not go to elite universities. It said: “Bright, working-class kids are being systematically locked out of top jobs. It is shocking that some still judge candidates on whether they wear brown shoes rather than on their skills.”

Weekly_ArticleSeptember 15, 2016
[Sports ★★★] (P1) Four visually impaired runners in the 1500 meters at the Rio Paralympics Games just earned some bragging rights: All put up times better than the US runner who took gold in the same Olympics competition, reports the Independent. …
END_OF_DOCUMENT_TOKEN_TO_BE_REPLACED 1

Technology, Weekly_ArticleNovember 1, 2015
[TECHNOLOGY ★] MOBILE TECHNOLOGY IS CHANGING MYANMAR (P1) U Myint Kyaw Thu says he wanted to make games since he was a five-year-old playing Nintendo. (P2) But growing up in Burma, now Myanmar, there was no Internet and PRECIOUS FEW mobile …
END_OF_DOCUMENT_TOKEN_TO_BE_REPLACED 1

Weekly_ArticleApril 22, 2015
[Business★★] Prepare for the largest wealth transfer in history [Business★★★] Signs That You Lack Emotional Intelligence [Thoughts★★★] The Curious Science of When Multitasking Works [Thoughts★★★] Man’s best friend was a late arrival in the Americas [Life★] Do You Need to …
END_OF_DOCUMENT_TOKEN_TO_BE_REPLACED

★★★★, Weekly_ArticleJune 3, 2016
[Sports ★★★★] (P1) Soccer’s five-times World Player of the Year Lionel Messi arrived at a court in Barcelona on Thursday to testify against charges of tax evasion. (P2) A few bypassers applauded the arrival of the Argentina and FC Barcelona player …
END_OF_DOCUMENT_TOKEN_TO_BE_REPLACED 1