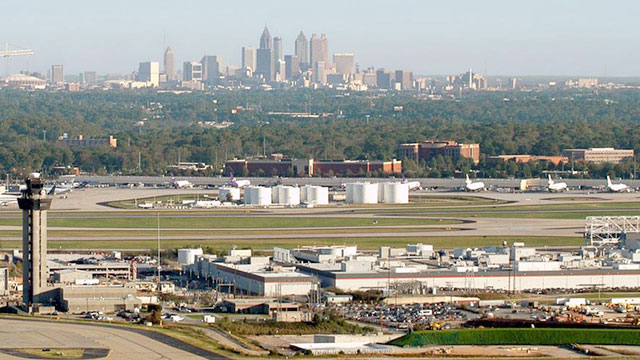 (P1) Atlanta’s Hartsfield-Jackson International Airport has nailed down the “World’s Busiest Airport” title for the 18th year in a row.

(P2) That was confirmed Friday when the Airports Council International (ACI) trade group finalized its full-year passenger numbers for 2015. The rankings did not change from ACI’s preliminary 2015 numbers released earlier this year, thus making Atlanta’s No. 1 ranking official.

(P4) Also, Atlanta solidified its hold on No. 1 by taking the top spot for “aircraft movements,” another measure of how busy an airport is. “Movements” refers to the number of takeoffs and landings at an airport. Atlanta had briefly lost the title for most movements to Chicago O’Hare in 2014 but surged back past its Illinois rival in 2015.

(P5) While each count is legitimate, the passenger tally is the most traditional barometer for determining the busiest airports.

(P6) Atlanta, of course, is the busiest hub for Delta Air Lines, which operates a massive connecting hub there.

(P7) “Atlanta has benefitted tremendously from its strategic location as a major connecting hub and port of entry into North America,” ACI said in its statement confirming its 2015 passenger counts. “The airport is within a two-hour flight of 80% of the population in the United States.”

(P8) Atlanta had long embraced its role as title-holder for the world’s busiest airport, though it’s recently taken a more cautious approach on the subject. The Atlanta Journal-Constitution notes the airport “earlier this year decided to downplay the ‘world’s busiest’ terminology, changing its tagline to the ‘world’s most traveled airport’.” There apparently was concern that “world’s busiest” mantra wasn’t necessarily the best message for fliers concerned about a smooth and relaxing travel experience.

(P9) As for Atlanta’s runner-up in the passenger count category, China’s Beijing Capital International Airport held down No. 2 spot for the second year in a row.

(P10) Dubai International and Chicago O’Hare made the biggest jumps within the top 10, each rising three spots to Nos. 3 and 4, respectively. Year-over-year passenger traffic grew 10.7% at Dubai and 9.8% at O’Hare.

(P11) Each of those airports passed London Heathrow, which fell three spots to No. 6 from No. 3. Passenger traffic rose at Heathrow, but its 2.2% increase was not enough to keep pace with the larger increases seen at Dubai and O’Hare. Also passing Heathrow was Tokyo’s Haneda, though it also fell (from No. 4 to No. 5).

(P12) Los Angeles and Dallas/Fort Worth gave the United States two more airports in the top 10, coming in at Nos. 7 and 10, respectively.

What do the following expressions or phrases mean

Brown shoes could mean you fail a job interview

Business, Weekly_ArticleSeptember 15, 2016
[Jobs ★★★] (P1) People who want to be investment bankers in London could be disappointed if they wear brown shoes. A report shows the investment banking industry follows old rules about how bankers should behave. Researchers found that the industry …
END_OF_DOCUMENT_TOKEN_TO_BE_REPLACED 1

Weekly_ArticleMarch 30, 2016
The IELTS Speaking (Part 1) covers a few general questions about familiar topics, lasting 4-5 minutes. The grading rubric is attached at the bottom.  FILMS Do you enjoy watching movies? What’s your favorite film? Who are your favorite actors? How often do you …
END_OF_DOCUMENT_TOKEN_TO_BE_REPLACED

Weekly_ArticleJanuary 24, 2016
[SPORTS ★] AMERICAN FIGURE SKATING IS IN SERIOUS DECLINE (P1) These are TROUBLED times for American figure skating, which was once so popular that it beat the men’s NCAA basketball tournament in TV ratings (10.1 to 8.8 in 1996). (P2) TV ratings have PLUMMETED. …
END_OF_DOCUMENT_TOKEN_TO_BE_REPLACED 1