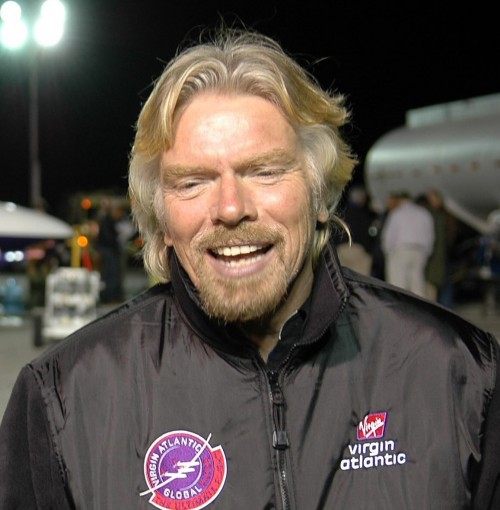 (P1) Sir Richard Branson is an English businessman. He is the chairman of the Virgin Group, a group of companies including Virgin Atlantic Airways and Virgin Records. It also has more than 200 entertainment, media and travel companies around the world.  According to Forbes magazine, Branson was the 281st richest person in the world in 2014. He is worth about $4.9 billion and he even owns two private islands.

(P2) Branson got bored and left school when he was 16 years old. He started a magazine for young people in 1966. He called it Student. The magazine was run by students, for students. It was so successful that it sold $8,000 worth of advertising in its first issue. He gave away the first 50,000 copies for free. A few years later, he started a business where people could buy and sell used records through the mail. It was called Virgin Records.

(P3) In 1972, Branson built a recording studio in Oxfordshire, England. He started to record musicians and sell their records. He called the company Virgin Music. The first record he published was Tubular Bells by a school friend called Mike Oldfield. It became very popular after being used in the movie “The Exorcist” in 1973. After that, many more musicians came to work for Branson. Some of them became very famous. Virgin Music became one of the top six record companies in the world.

Health, Weekly_ArticleSeptember 27, 2016
[Health ★★] (P1) People who use the Internet too much may have mental health problems, especially if they cannot get online regularly. A survey into the Internet habits of 254 students found 107 students were addicted or had problems like …
END_OF_DOCUMENT_TOKEN_TO_BE_REPLACED 1

Weekly_ArticleApril 9, 2016
[World News ★★★] (P1) Two guys fleeing cops in Britain had to contend with more than just the officers and helicopter on their tail: A bunch of kids on an Easter egg hunt also stood between them and freedom, reports CNN. …
END_OF_DOCUMENT_TOKEN_TO_BE_REPLACED 1

Weekly_ArticleFebruary 21, 2016
[TRAVEL ★★] WOMAN KEEPS TRYING TO FLY WITHOUT A TICKET [BUSINESS ★] COLOMBIA SENDS FLOWERS TO THE WORLD [WORLD NEWS ★★] CANADIAN ISLAND OFFERS REFUGE TO HATERS OF DONALD TRUMP [LIFE ★] A LETTER FROM A DAUGHTER TO A MOTHER [BUSINESS ★★] WAL-MART IS NOT DOING WELL IN BRAZIL [WORLD …
END_OF_DOCUMENT_TOKEN_TO_BE_REPLACED

Weekly_ArticleJuly 31, 2015
[TRAVEL ★★★] THE BEAUTIFUL SIDE OF BORDER TOWNS (P1) International borders can be difficult to cross and easy to hate. Lines are long, TEMPERS SHORT, guns PLENTIFUL. (P2) Borders mean HASSLES like paperwork and annoying questions – exactly the sort of …
END_OF_DOCUMENT_TOKEN_TO_BE_REPLACED 1