Boo? Halloween Used to Be About Finding True Love 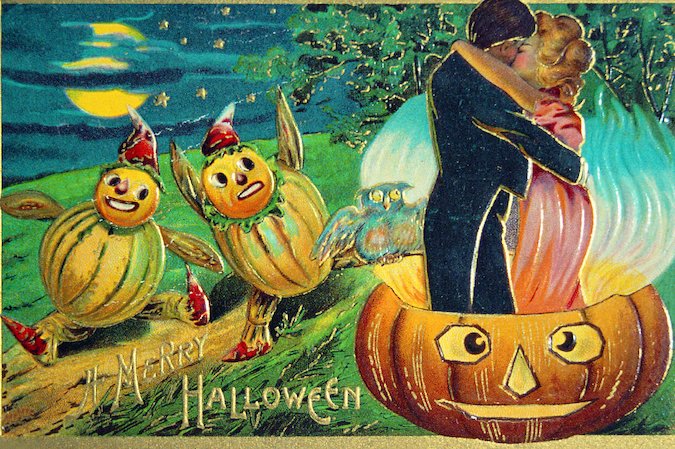 (P1) Halloween wasn’t always so scary. It was once less about fright and more about flirtation.

(P2) A century ago, the rituals surrounding the celebration at the end of October emphasized love. Newspapers recommended parlor games that promised to reveal romantic fortune. Even the cast of characters was more oriented toward matters of the heart.

(P3) “Halloween in the early 20th century had far less emphasis on blood, gore and scary monsters, and much more emphasis on courtship, romance and the opportunity for love,” Daniel Gifford, the former manager of museum advisory committees for the Smithsonian National Museum of American History explained in a museum blog post last year.

(P4) “In fact, the image of Cupid was often interspersed among the more familiar black cats, witches and jack-o’-lanterns.” Halloween games and traditions reflected that attention to themes of love, with many offering a peek at what the future holds. For women in a restrictive society, they offered a semblance of control.

(P5) “Given the importance of finding a desirable marriageable man in an era when prim, proper, ladylike behavior was the norm, young women often reveled in chances to participate in well-established and -regarded traditions that might guide them to the spouses of their dreams,” Diane Arkins, the author of the book “Halloween: Romantic Art and Customs of Yesteryear,” from Pelican Publishing, said in an email. Here’s a look at some of those largely forgotten customs.

Snap Apple and Other Games of Love

(P6) Apples played a starring role in many of Halloween’s romantic traditions. One game, Snap Apple, challenged participants to use only their teeth to bite an apple suspended from the ceiling by a string or ribbon, Ms. Arkins writes in her book. The first to succeed would be the first to marry. (In a more dangerous version of the game, the apple is speared by a stick with a lit candle on the opposite end.)

(P7) According to tradition, a successful first attempt at that game — retrieving an apple with one’s mouth from a container filled with water — foretold true love reciprocated, Ms. Arkins writes. Repeated failure suggested that a less-than-ideal match awaited, or perhaps it was a warning to move on.

(P8) Other traditions were simpler. One old custom called for cutting a long strip of apple skin and tossing it over one’s shoulder. The landed peel was said to resemble the first initial of a suitor.

(P9) Another tradition involved eating an apple in front of a mirror to conjure the image of one’s soul mate, just in time for him or her to ask for the last bite. The seeds within offered insight, too, with poems serving as guides to what they predicted. Here is one such poem, reproduced by Ms. Arkins and published in the “Kiddies’ Hallowe’en Book” in 1931: 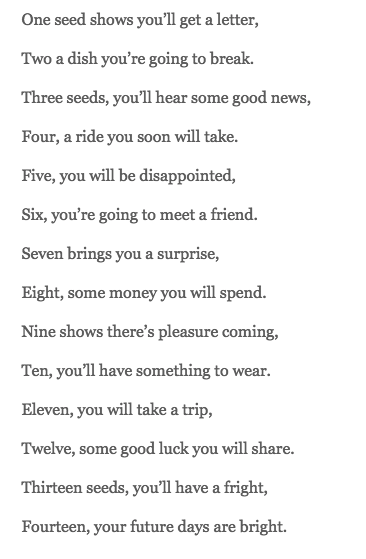 (P10) As varied and popular as the romantic Halloween customs were, they began to lose their hold on the American public in the early 20th century. Women, the traditional party hosts and targets of such games, were gaining greater agency over their lives, eroding the appeal of rituals that underscored their lack of power.

(P11) At the same time, a figure re-emerged in popular culture: the powerful witch. And unlike some modern depictions, she was alluring. “The beautiful witch had both power and attractiveness, and could use both to make her own decisions about romance, suitors and the future of her love life,” Mr. Gifford explained. The witch had no need for fortunetelling games: She could create her own destiny.

Business, Weekly_ArticleDecember 6, 2015
[BUSINESS ★★★] LIFE AS A WHISKEY TASTER (P1) When the great-grand-niece of Jack Daniel, applied to be a WHISKEY taster at the Jack Daniel DISTILLERY, she had to go through the same RIGOROUS selection process as everyone else. (P2) She passed the …
END_OF_DOCUMENT_TOKEN_TO_BE_REPLACED 1

Life, Weekly_ArticleJuly 18, 2015
[LIFE ★★] RICH AND AMERICAN? AUSTRALIA WANTS YOU (P1) FLUSH WITH the success of a millionaire visa program to ATTRACT wealthy Chinese, Australia is now promising citizenship to rich Americans who are WILLING to bring their cash and ENTREPRENEURIAL talent DOWN …
END_OF_DOCUMENT_TOKEN_TO_BE_REPLACED 1