Boeing May Dramatically Change the Way We Fly 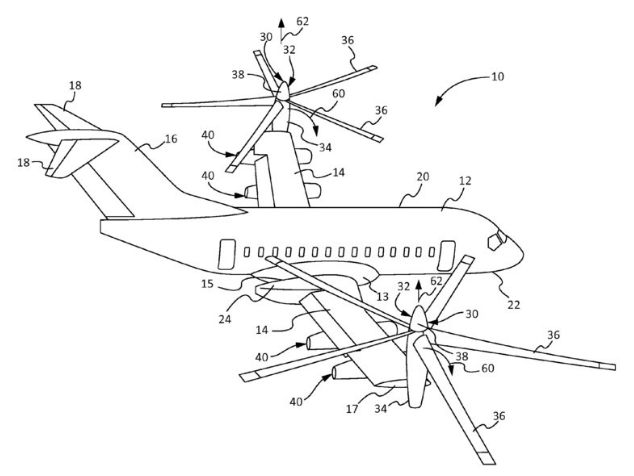 (P1 If a patent secured by Boeing this week is any indication, the company is eyeing a major change in the way travelers fly. The Seattle Times reports the patent details a passenger plane that takes off and lands vertically like a helicopter via tilting rotors. The rotors, horizontal for takeoff and landing, rotate to become propellers during flight. Boeing was one of two developers behind the US military’s similar V-22 Osprey, which went into service in 2007. However, the Osprey can only carry up to 24 soldiers. And a prototype for a commercial plane that takes off and lands vertically from Bell, the other developer of the Osprey, can only carry nine passengers, according to Business Insider. Boeing’s patent calls for a plane that carries 100 passengers.

(P2) There are other major differences between the Osprey and the plane shown in Boeing’s patent. Boeing’s plane would have four engines housed in its wings instead of two engines housed in the tilt-rotors themselves. This means less structural reinforcement is necessary. The wings are also positioned lower than the Osprey’s, closer to a traditional commercial plane’s, in order to make maintenance and fueling easier. A passenger plane that takes off and lands like a helicopter could allow for more regional commercial flights to leave from small airfields, New Atlas reports. But it’s unclear if Boeing actually plans to build the new plane. “Boeing files tons of patents, so this might not even come to fruition,” a Boeing spokesperson tells Business Insider. “I’m not saying it won’t.”

What’s the difference between “such” and “so”?

Q&A, UncategorizedJanuary 9, 2020
“Such” and “so” both mean “very”. However, the difference is that “such” is a determiner while “so” is an adverb. Therefore, they are used differently in sentences.   Since “such” is a determiner, it should be used with a noun phrase.  …
END_OF_DOCUMENT_TOKEN_TO_BE_REPLACED

Business, Weekly_ArticleAugust 17, 2016
[Business ★★★] (P1) U.S. authorities say Latin America’s largest airline has agreed to some $22 million in civil and criminal fines in connection with a scheme to pay bribes to end a labor strike in Argentina a decade ago. (P2) Chile-based …
END_OF_DOCUMENT_TOKEN_TO_BE_REPLACED 1