ObamaCare Premiums Are Going to Soar Next Year 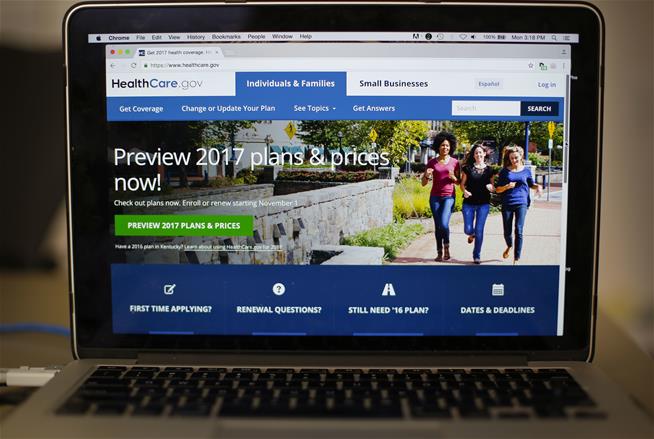 (P1) Premiums will go up sharply next year under President Obama’s health care law, and many consumers will be down to just one insurer, the administration confirmed Monday. That’s sure to stoke another ObamaCare controversy days before a presidential election, the AP reports. Before taxpayer-provided subsidies, premiums for a midlevel benchmark plan will increase an average of 25% across the 39 states served by the federally run online market, according to a report from the Department of Health and Human Services. Some states will see much bigger jumps, others less.

(P2) Major national carriers such as UnitedHealth Group, Humana, and Aetna scaled back their roles, meaning about one in five consumers will only have plans from a single insurer to pick from. Republicans pounced on the numbers as a warning that insurance markets created by the 2010 health overhaul are teetering toward a “death spiral.” “It’s over for ObamaCare,” Donald Trump proclaimed at a campaign rally Monday evening in Tampa, Fla., promising that his own plan would deliver “great health care at a fraction of the cost.” Administration officials, however, stress that subsidies provided under the law, which are designed to rise alongside premiums, will protect most customers.

Weekly_ArticleOctober 31, 2016
[Sports ★★★] (P1) Curling is a popular ice sport in many northern countries. Although it is played all over the world and it is an Olympic sport, not many people really understand the rules. Actually, curling is a very simple and …
END_OF_DOCUMENT_TOKEN_TO_BE_REPLACED 1

SAY HELLO TO THE “SEA BUNNY”

Weekly_ArticleJuly 31, 2015
[ENVIRONMENT ★★] SAY HELLO TO THE “SEA BUNNY” (P1) Say hello to this week’s Internet OVERLORD, the FLUFFY-looking “sea BUNNY.” (P2) The animal isn’t actually a tiny ocean-DWELLING rabbit. The creature ELICITING “awwws” around the world is a type of SEA …
END_OF_DOCUMENT_TOKEN_TO_BE_REPLACED 1

Weekly_ArticleJuly 27, 2016
[Animals ★★] (P1) After a baby bird fell into a garden from her nest, she formed a surprising friendship with a dog. The dog did not harm the bird but took care of her. (P2) The dog’s owner made a new home …
END_OF_DOCUMENT_TOKEN_TO_BE_REPLACED 1