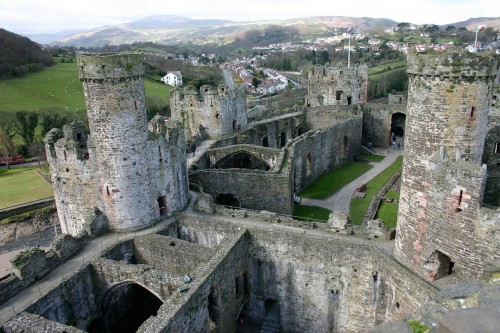 (P1) Wales is a part of the United Kingdom. It is located to the west of England. The capital of Wales is Cardiff, which has around 325,000 people. The population in Wales is less than three million people. Most of the people live in the south and the east of the country. The main languages spoken in Wales are Welsh and English. Welsh is a Celtic language, and about one out of every five people in Wales speaks it.

(P2) Wales is a very old country. People have lived in Wales for at least 29,000 years. The Romans first entered Wales over 2000 years ago, and they stayed in Wales for over 300 years. The Romans used their technology to collect large amounts of gold, copper, and other metals such as lead. It is not clear what happened in the 400 years after the Romans left Wales, but by the 16th century, Wales became a part of England. Laws were passed in England while Henry VIII was king of England. Nowadays, Wales is an independent country. Although it is joined with England by land, and it is part of Great Britain, Wales is a country in its own right.

Science, Weekly_ArticleDecember 8, 2016
[Science ★★] (P1) Have you ever seen an animal so cute that you just wanted to explode with happiness? Science has finally explained why you feel that way, and why it’s actually good for your mood. (P2) Student researchers at Yale University …
END_OF_DOCUMENT_TOKEN_TO_BE_REPLACED 1

Q&A, UncategorizedJanuary 9, 2020
Actually, both are correct! However, be careful with which one you use, as they mean different things! The prepositions “in” and “at” indicate whether you are referring to a location in time or in space. “In the beginning” is used …
END_OF_DOCUMENT_TOKEN_TO_BE_REPLACED 1

Business, Weekly_ArticleDecember 6, 2015
Some experts say Amazon already surpassed the sales volume of brick-and-mortar shops. What lessons can the traditional retailers learn from Amazon? Read the article out loud with the Cambly tutor. [BUSINESS ★★★] 4 LESSONS BRICK-AND-MORTAR RETAILERS CAN LEARN FROM AMAZON (P1) …
END_OF_DOCUMENT_TOKEN_TO_BE_REPLACED

AT THE U.S. BORDER

Weekly_ArticleNovember 18, 2015
AT THE U.S. BORDER If you’re coming to the United States, the first person you meet on arrival will be an officer of Customs and Border Protection, or CBP. The officer will inspect your passport and documents, so have all …
END_OF_DOCUMENT_TOKEN_TO_BE_REPLACED