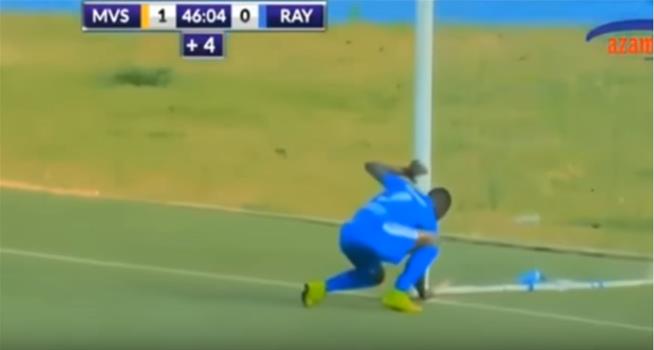 (P1) Rwandan soccer officials have added a new rule to the game: no witchcraft. The move comes after a bizarre turn of events at a match between teams Mukura Victory and Rayon Sports on Dec. 16. After hitting the crossbar, Rayon’s Moussa Camara can be seen in video footage dashing to one of the goalposts and grabbing an object, one that had been placed there by the goalie as a bit of “juju” to help him protect the net. The goalkeeper then chases him before both receive yellow cards, notes Fox Sports. The even weirder part: After the disruption, Camara scored his team’s tying goal in the match, which ended 1-1.

(P2) Under the new rules, players and coaches found to be using witchcraft to try to gain an advantage face fines and penalties, reports the Rwanda New Times. The Washington Post notes that “juju” has long played a role in African soccer. In fact, the Confederation of African Football previously banned witchcraft after Rwanda’s national team was accused of burying a doll behind its net in a 2003 match against Uganda. But a soccer official in the country says the traditional practice gives the nation a bad image. Hence, the new penalties. “Since there is no scientific way to prove the use of witchcraft, these measures will be based upon reports from match officials and anything that is deemed to incite witchcraft will be put under consideration,” he says.

IBM Working on Bot to Help Elderly Age at Home

★★★, Health, Technology, Weekly_ArticleJanuary 5, 2017
[Technology & Health ★★★] (P1) Assisted living facilities and personal nurses aren’t exactly cheap. And as the Baby Boomer generation ages, finding an affordable means of helping people age in the comfort of their own home could be good not …
END_OF_DOCUMENT_TOKEN_TO_BE_REPLACED 1

★★★★, Weekly_ArticleJanuary 11, 2017
[Literature ★★★★] (P1) Literature and music enthusiasts across the globe might be debating the Nobel Prize for Literature awarded to iconic musician Bob Dylan but students at Jamia Millia Islamia have been studying his songs as poems in literature curriculum …
END_OF_DOCUMENT_TOKEN_TO_BE_REPLACED 1

★★★★, Technology, Weekly_ArticleJune 29, 2016
[Technology ★★★★] (P1) Not yet terrified that you’ll suddenly burst into flame? Put on one of Hiral Sanghavi’s jackets. The man behind Kickstarter’s BauBax travel jacket, which last year became the fourth most-funded project on Kickstarter, raising $9.2 million—hopes to raise $100,000 …
END_OF_DOCUMENT_TOKEN_TO_BE_REPLACED 1

Weekly_ArticleJuly 31, 2015
[WORLD NEWS ★] ZIMBABWE SEEKS CECIL THE LION’S KILLER (P1) The US dentist who killed a lion in Zimbabwe should be EXTRADITED to FACE CHARGES, Zimbabwe’s Environment Minister Oppah Muchinguri has said. (P2) Walter Palmer’s extradition was being SOUGHT so that …
END_OF_DOCUMENT_TOKEN_TO_BE_REPLACED 1