White Rainbows Frequent Only 2 Places in the World 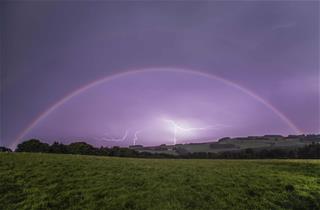 (P1) Waterfalls are among the most reliable places to catch a rainbow, but only two on the planet offers up a regular display of its close cousin, the moonbow: Cumberland Falls in Kentucky and Victoria Falls on the Zambia-Zimbabwe border. Also called a white rainbow, a moonbow appears when moonlight (which is sunlight reflected off the moon) in the days just before, during, and after a full moon hits the mist generated by the falls. Because we can’t see colors well in low light, a moonbow appears white, reports BBC Travel, though photographers can use long exposures to capture its actual colors. Moonbows are occasionally, but not regularly, seen elsewhere in the world, including at Yosemite Falls in California.

(P2) What makes Cumberland Falls and Victoria Falls so unique is that they boast just the right amount of splash along a wide enough (rather than deep and narrow) gorge so that moonlight can reach down and across the mist. CNN notes that because sunlight is much stronger than moonlight, moonbows are rainbow’s fainter cousin. They’re temperamental in other ways: Cloudy nights can prevent the bow from forming, and Niagara Falls on the US-Canada border has lost its moonbow thanks to light pollution. Bustle reports on one photographer who in November caught a similar fogbow, which forms in the fog, arching over a solitary tree in Scotland; it went viral on Instagram and Twitter.

★★★, Weekly_ArticleJanuary 5, 2017
[Sports ★★★] (P1) Rwandan soccer officials have added a new rule to the game: no witchcraft. The move comes after a bizarre turn of events at a match between teams Mukura Victory and Rayon Sports on Dec. 16. After hitting …
END_OF_DOCUMENT_TOKEN_TO_BE_REPLACED 1

Weekly_ArticleJanuary 3, 2016
Chapter 1-3:The Buchanans Aim: In this 30-minute lesson, you will go over the part 1-3 of the book. Go over comprehension questions after each paragraph, and practice using new expressions. After saying hello, read the following part of the book …
END_OF_DOCUMENT_TOKEN_TO_BE_REPLACED

Why Employees At Apple And Google Are More Productive

★★★★, Business, Weekly_ArticleMarch 14, 2017
Direction: After a short greeting, read the following article out loud with your tutor. Go over highlighted vocab/expression to make sure …
END_OF_DOCUMENT_TOKEN_TO_BE_REPLACED