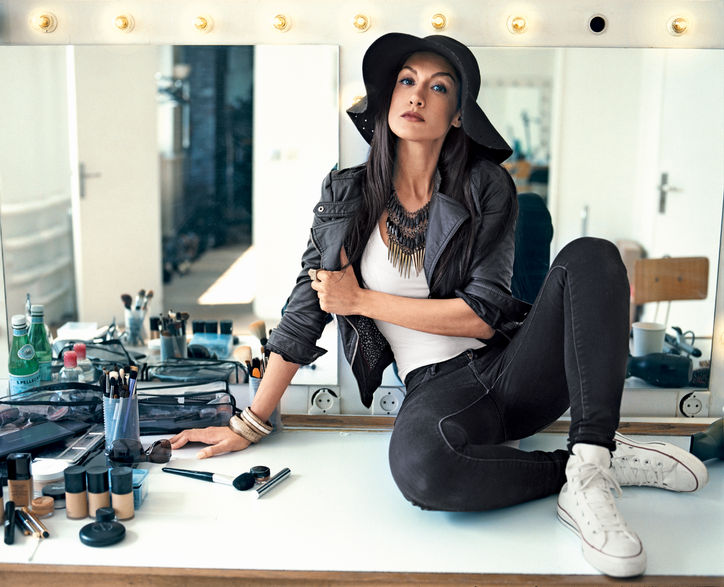 (P1) After fleeing Iran as a child, the singer known as Arghavan is out to unmuzzle her countrywomen. So what if it’s risky?

(P2) On May 10 in Stockholm, Sweden, Arghavan, 31, smiled as she posted a YouTube video on Facebook. In the four-minute clip, “Happy in Tehran,” six young Iranian men and women—one of them a close friend of hers—camped it up, dancing on rooftops and lip-synching to Pharrell Williams‘ megahit. Arghavan, an aspiring Iranian pop star who’d left the country at age three, sent her friend an email and captioned her post “JUST LOVE IT!!”

(P3) Nine days later the dancers were detained. Why? Because in Iran women are effectively not allowed to sing or perform in public, one of the many freedoms severely limited after the 1979 revolution (which prompted Arghavan’s family to flee the country). Arghavan tried everything to reach her friend, but no luck. Says the singer, “I was up the whole night worrying.”

(P4) The shutdown of the “Happy” dancers (who were convicted of producing a vulgar video and given suspended sentences) hit home for Arghavan. In 2010 she’d won a coveted spot on the TV show Googoosh Music Academy, a wildly popular American Idol-style competition filmed in London and accessible only illegally in Iran. (It’s named for the country’s biggest pop singer, who has lived in exile since 2000.) Each week that Arghavan advanced in the competition, she found herself flooded with emails from female fans. It wasn’t just her choreography or costumes—”though they did like my hats,” she jokes—it was that Arghavan was an Iranian girl belting her heart out in front of a massive crowd, an impossible feat for a woman actually living in Iran. “They wrote, ‘I wish I could sing on a stage like you.’ They were telling me their stories,” she explains. “They were asking me for help.” (P5) Arghavan decided to use her newfound fame to give voice to her silenced sisters, who, like her, “can’t breathe without music.” Recently she headed back to Iran for the first time in 15 years, risking imprisonment to convince women artists to share their plight in a documentary; she also wrote a book Zan (“woman” in Farsi), published this summer in Swedish. “It wasn’t easy to find women who dared to speak, but these girls are very brave,” she says. Since then she’s been lecturing constantly, including becoming an ambassador for the Swedish National Committee for U.N. Women and giving a TEDx talk this month, trying to rally outrage at women’s oppression not just in Iran but around the world. “This kind of activism is very important,” says Shirin Ebadi, the Nobel Peace Prize-winning human rights lawyer in Iran. “All these performances, albums, books, and films get sent to Iran through YouTube, and everyone ends up seeing them. So effectively the government fails in its aims at censorship.” To Julia Wiklander, founder of the advocacy network Girls’ Globe, “Arghavan is a true activist and one of the most passionate individuals I’ve met. She takes substantial risks to get the word out. She won’t give up.”

(P6) Arghavan welcomes the support. “We have to stand together and shout, ‘No, you cannot stop us from singing,'” she says. “‘We want change, and we have the guts to make it happen.'”

THE DIFFERENCE BETWEEN ‘GOOD ON PAPER’ AND ‘GOOD FOR YOU’

Life, Weekly_ArticleOctober 28, 2014
Comment [Life★] The Difference Between “Good on Paper” and “Good For You” (P1) If you’re on Match.com or any other online dating site like my friend J, you’ve likely already learned this lesson: Men who look good on paper don’t …
END_OF_DOCUMENT_TOKEN_TO_BE_REPLACED

A ROSETTA STONE FOR A LOST LANGUAGE

TED, Weekly_ArticleOctober 20, 2014
A comment  [TED] Rajesh Rao: A Rosetta Stone for a lost language Rajesh Rao is fascinated by “the mother of all crossword puzzles”: how to decipher the 4000-year-old Indus script. He’s enlisting modern computation to try to read this lost …
END_OF_DOCUMENT_TOKEN_TO_BE_REPLACED 1

Life, Weekly_ArticleOctober 18, 2015
[LIFE ★] PEOPLE ARE DYING FOR SELFIES (P1) If 2014 was the year of the selfie, then 2015 took the art of self-photography to a new and dangerous level. (P2) People are, quite LITERALLY, dying to take a picture of themselves. …
END_OF_DOCUMENT_TOKEN_TO_BE_REPLACED 1

Life, Weekly_ArticleSeptember 5, 2015
[LIFE ★★] THE NEW DATING GAME (P1) In his new book, Date-onomics: How Dating Became a LOPSIDED Numbers Game, author and former Fortune and Money columnist Jon Birger CRUNCHES SOME NUMBERS from the U.S. Census Bureau and other social surveys in order to SHED SOME …
END_OF_DOCUMENT_TOKEN_TO_BE_REPLACED