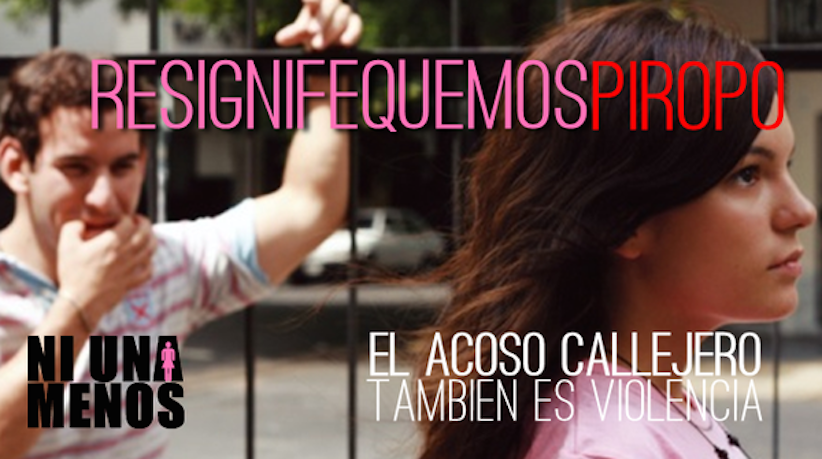 (P1) When she left her house each day, Aixa Rizzo would BRACE herself for a BARRAGE of sexually LADEN comments from male electricians working on a project in her neighborhood.

(P2) It started with UNDER-THE-BREATH remarks, applause, and WHISTLES, but over several weeks developed into VULGARITIES about her body and CHANTS about sexual fantasies. One day, three of the men followed her, PROMPTING Rizzo to turn around and shower them with PEPPER SPRAY. The men SWORE at her and told her she was crazy, but they ULTIMATELY walked away.

(P3) “They shouted these things at me for an entire month,” the 20-year-old university student said in an interview with The Associated Press. “I couldn’t walk out of my house in peace.”

(P4) Frustrated by something ALL TOO COMMON in this South American country of 41 million, Rizzo in April posted a video on YouTube about her experience. She argued that verbal ASSAULTS could lead to physical abuse.

(P5) The video, seen by half a million people, TOUCHED A NERVE, turning Rizzo’s campaign into a CAUSE CELEBRE and prompting lawmakers to draft legislation that would make such street HARASSMENT a crime. A vote is expected within a few months.

(P6) The moves come amid a national campaign protesting physical attacks against women. Tens of thousands of Argentines TOOK TO THE STREETS last week in a march DUBBED “ni una menos,” meaning not one more woman lost to gender violence.

(P7) There are many CONTRADICTIONS in Argentina when it comes to gender equality. Women have equal rights under the law and there are more women than men ENROLLED in college. The country’s most powerful person is a woman — President Cristina Fernandez. But the MACHO culture of many Latin American countries is PERVASIVE here as well.

(P8) Many men, from taxi drivers to construction workers to WHITE COLLAR workers, frequently whistle or say things when women walk by.

(P9) “LEWD comments are just the TIP OF THE ICEBERG that MANIFESTS itself in DOMESTIC VIOLENCE,” said opposition congresswoman Victoria Donda, who has PUT FORWARD legislation making such verbal TAUNTS a crime.

(P10) Under Donda’s bill, which includes funds to raise awareness about abuse in schools and workplaces, women could report sexual harassment in public places.

(P11) A judge would then review the complaint, interview any witnesses, and decide whether a fine should be LEVIED.

(P12) The law is aimed at COMBATTING AGGRESSIVE sexual comments, not COMPLIMENTS about nice hair or clothes.

(P13) However, Orlando Britez, a 23-year-old construction worker, worries that men could be punished if women INTERPRET their comments as too aggressive.

(P14) “It means I would have to hold it in, and not say what I really want to” when women PASS BY, Britez said from a Buenos Aires worksite.

(P15) “If we say nice things, what’s wrong with that?” asked fellow construction worker Elio Borlio. “Things like, ‘Look at how beautiful you are.’”

(P16) The bill appears to have wide support, including among ruling party lawmakers, and two similar proposals are being considered by the MUNICIPALITY of Buenos Aires, the country’s capital and largest city.

(P17) Concern has been growing about increased violence against women, including a rise in reported cases of domestic abuse.

(P19) There has also been a growth in the number of women killed in violent acts nationwide as well, according to Meeting House, an organization that works with BATTERED WOMEN. It says that 277 women were killed violently last year, including in cases of rape and kidnapping, up from 208 in 2008, when it began to COMPILE statistics.

(P20) Other countries in the region have considered similar bans on lewd comments.

(P21) Under a law passed in Peru in March, women can report street harassment and a judge then evaluates the claim and decides on a possible jail sentence.

(P22) A CATALYST for that legislation was an incident last year that SCANDALIZED the country. Peruvian singer and actress Magaly Solier claimed that a man masturbated behind her on a busy bus in Lima. The man was identified and Solier filed a police report. But a judge decided against pursuing charges, saying that because there was no physical contact, the complaint didn’t belong in court.

(P23) In her video, Rizzo tells a similar story. After the pepper spray incident, she tried to file a police report, but was told the men couldn’t be charged because they never touched her.

(P24) In a Facebook forum called “Action/Respect,” women share stories of men JEERING, hissing and calling out to them.

(P25) One woman recently wrote that men would shout at her even though she was six months pregnant.

(P26) Beyond the POTENTIAL for harm, many women say the harassment is simply INFURIATING.

(P27) “If they say, ‘Nice smile,’ I laugh and just continue walking,” said Susana Godoy, a 20-year-old university student in Buenos Aires. “But I hate it when they say, ‘Hey, baby,’ and other GROSS stuff.”

Weekly_ArticleJune 19, 2015
[WORLD NEWS ★★] SOUTH KOREAN VILLAGE QUARANTINED BY MERS (P1) Fear in South Korea over the Middle East RESPIRATORY Syndrome (MERS) virus has KEPT CROWDS DOWN at baseball games, PROMPTED churchgoers to bow instead of shake hands, and led to an …
END_OF_DOCUMENT_TOKEN_TO_BE_REPLACED 1

Weekly_ArticleJune 9, 2016
[Sports ★★] (P1) Muhammad Ali, the world’s greatest sporting hero, has died, aged 74. He was in the hospital with breathing problems. His children flew to be with him at the end. People say Ali is the best boxer ever. He …
END_OF_DOCUMENT_TOKEN_TO_BE_REPLACED

Weekly_ArticleAugust 23, 2015
[WORLD NEWS ★] FRENCH LAWMAKER PROPOSES VEGETARIAN OPTION FOR SCHOOL LUNCHES (P1) France has been GRAPPLING with how to RECONCILE religious beliefs with SECULAR values when it comes to pork in school lunches. One lawmaker’s solution: vegetarian meals. (P2) After BANNING …
END_OF_DOCUMENT_TOKEN_TO_BE_REPLACED 1

Life, Weekly_ArticleAugust 7, 2015
[LIFE ★★] IS COUPLES THERAPY HELPFUL? (P1) A recent OP-ED in The New York Times titled “The FUTILITY of Couples Therapy” has SPARKED a lot of conversation. Maybe that’s because we all know a couple who has tried therapy, or maybe we’ve even been that …
END_OF_DOCUMENT_TOKEN_TO_BE_REPLACED 1