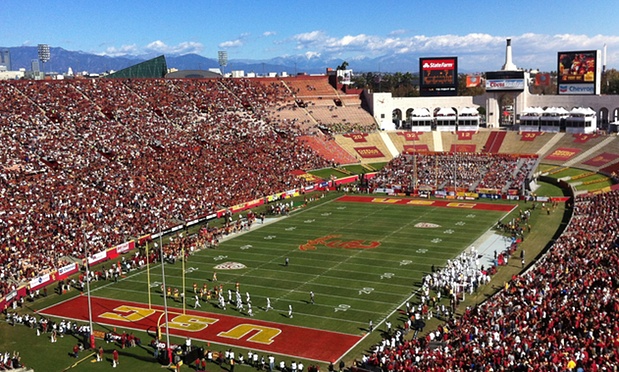 (P1) When the COLLEGIATE sports season KICKS OFF again this week millions of Americans will be TUNING IN to watch football and basketball games – but most will be blind to the off-screen struggles faced by players. While television companies and colleges RAKE IN billions of dollars in REVENUE from their labor, very little of that revenue FILTERS DOWN to college athletes.

(P2) A recent study by the National College Players Association revealed typical college players must pay more than $3,000 a year OUT OF POCKET for daily expenses – while the MARKET VALUE of collegiate basketball and football athletes is more than $6bn.

(P3) Instead of getting a GENUINE “free academic ride” via scholarships, many who do graduate EMERGE with a mountain of debt from having to cover living costs. Many student-athletes never graduate at all. Academic scholarships can be REVOKED for minor INFRACTIONS or even sports-related INJURIES.

(P4) Universities make TONS of money off athletes, many of whom only have long-term physical disabilities from CRIPPLING injuries to show for their college sports experiences.

(P5) What happens when college athletes get injured for life? People incorrectly assume they are fully covered by health insurance. But neither the NCAA nor the National Association of Intercollegiate Athletics (governing small athletics programs like Cal Lutheran) requires schools to provide full and ADEQUATE health coverage. Many former athletes are stuck with BURDENSOME medical bills for long-term sports-related injuries. The NCAA recently argued it is not legally responsible to protect college athletes from injury – a duty that professional sports leagues have accepted, ALBEIT RELUCTANTLY. Since they are CLASSIFIED as student athletes instead of employees, the NCAA also DENIES them WORKERS’ COMPENSATION.

(P6) Unfortunately, these labor issues are UNLIKELY to be ADDRESSED anytime soon. In a UNANIMOUS decision on August 17, the National Labor Relations Board dealt a SETBACK to efforts by Northwestern University football players seeking to be recognized as employees so they could be ELIGIBLE to UNIONIZE.

(P7) The NLRB’s PRETEXT for denying private college athletes the right to a union – that this would treat them differently than athletes on public university campuses – is BOGUS. The NLRB has frequently allowed graduate student teaching assistants to organize at private institutions without considering the comparison with public schools. Why should it be different with college athletes?

(P8) Other fears are equally SPURIOUS, such as professionalism of college athletics RUINING the competitive nature of collegiate sports by offering unfair advantages to big revenue generating schools. Large universities such as Ohio State and University of Southern California already enjoy these advantages.

(P9) All of these young men and women student athletes – or workers – continue to be EXPLOITED as a result of this OBSTRUCTIONISM. Instead of DUCKING its responsibility, the NLRB should rule on whether or not these players are employees entitled to collectively organize. These athletes have the right to improve their working conditions and have a voice over decisions that PROFOUNDLY affect their playing and the rest of their lives. We owe it to them.

Life, Weekly_ArticleSeptember 5, 2015
[LIFE ★★] THE NEW DATING GAME (P1) In his new book, Date-onomics: How Dating Became a LOPSIDED Numbers Game, author and former Fortune and Money columnist Jon Birger CRUNCHES SOME NUMBERS from the U.S. Census Bureau and other social surveys in order to SHED SOME …
END_OF_DOCUMENT_TOKEN_TO_BE_REPLACED

Lifestyle, Weekly_ArticleDecember 20, 2016
[Lifestyle ★] (P1) A German couple likes Christmas. They have Christmas decorations. They buy more and more decorations every year. Now they have many decorations. (P2) They start decorating in October. They take 8 weeks to set everything up. They put 100 Christmas …
END_OF_DOCUMENT_TOKEN_TO_BE_REPLACED 3

Culture, Weekly_ArticleNovember 16, 2016
[Culture ★★] (p1) A group of school children from a village in China must take a dangerous journey. If they want to get home, they have to climb a big mountain. (P2) The children climb about twenty meters on the ladders to the …
END_OF_DOCUMENT_TOKEN_TO_BE_REPLACED 1

Business, Weekly_ArticleAugust 23, 2015
[BUSINESS ★] AMERICANS ARE WORKAHOLICS (P1) Checking emails at home is just part of the job for most Americans, who would also prefer to receive money rather than more paid vacation or sick days, according to a poll. (P2) More than …
END_OF_DOCUMENT_TOKEN_TO_BE_REPLACED 1