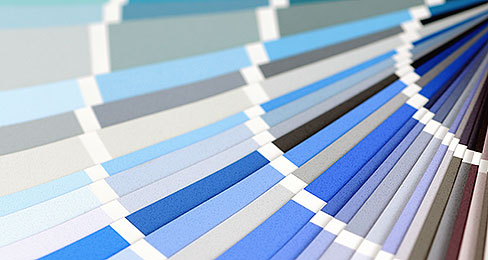 (P1) The world seems DREARY, GLOOMY, and gray when you’re FEELING BLUE. In fact, being DOWN IN THE DUMPS might even affect how you perceive the color blue. A recent study about color was published in the journal Psychological Science. It shows a direct connection between a person’s ability to perceive color and their emotions.

(P2) Psychologists have long known that emotions can impact the way people perceive things. That’s in part because chemicals from your brain might affect how you process what you see. “Color is such an important part of our experience,” says lead author Christopher Thorstenson, a psychologist at the University of Rochester, in New York.

(P3) There’s a reason, he says, that sad people commonly describe the world as “colorless,” and “gray,” and happy people use words like “bright” and “colorful.”

(P4) In the experiment, the researchers randomly assigned people to one of two groups. People in the “sadness” group watched a sad scene from The Lion King. Those in the “AMUSEMENT” group watched a comedy SKIT. Another part of the study had people watch a NEUTRAL desktop screensaver.

(P5) Everyone was then asked to look at red, yellow, green, and blue patches that had been MUTED to a gray-ish color. “Some of the patches are pretty difficult [to make out],” Thorstenson admits. He says it takes some time to figure out their SHADE. People were scored on how accurate their color perception was. Then they completed an emotional EVALUATION.

(P6) The result? Sad people had a hard time seeing the difference between shades along the blue-yellow color AXIS. But people who were sad did not have problems seeing colors in the red-green SPECTRUM. Thorstenson says this could be the result of an evolutionary need to see red as an anger response.

(P7) Thorstenson says these results HIGHLIGHT the possible importance of dopamine in sight. Dopamine is a chemical that sends signals to the brain. Researchers are hoping to focus more on dopamine in the future. “We know dopamine is important in MOOD DISORDERS like depression and ADHD, but there might be something going on with how dopamine affects how we see colors, too,” Thorstenson says. “How we feel can really influence how we see the world around us,” he says.

Weekly_ArticleSeptember 13, 2015
[TRAVEL ★★] SAN MIGUEL DE ALLENDE IS CULTURAL AND HISTORIC (P1) With COBBLESTONE streets and no traffic lights, San Miguel de Allende has the look of a SLEEPY Mexican town. (P2) But behind the colonial-era FACADES it HUMS with cultural activity. The town of …
END_OF_DOCUMENT_TOKEN_TO_BE_REPLACED

Entertainment, Weekly_ArticleSeptember 21, 2016
[Entertainment ★★★] (P1) Sully took flight in theaters this weekend and has landed with a solid $35.5 million to take the top spot at the box office, according to studio estimates Sunday. The Clint Eastwood-directed film about the Miracle on …
END_OF_DOCUMENT_TOKEN_TO_BE_REPLACED 1

Weekly_ArticleNovember 3, 2015
Describe the video/image. Challenge yourself to tell a lively and interesting story. [wpvideo FgjSR07u] Suggested expressions to use: at this stage in the game: at this time the ball is in your court: it’s your decision or responsibility to do something now blow …
END_OF_DOCUMENT_TOKEN_TO_BE_REPLACED

Business, Weekly_ArticleDecember 15, 2016
[Business ★★] (P1) Around 200,000 tons of used coffee end up in London’s landfills a year. A young man named Arthur Key, however, knows how to make use of the coffee grounds. (P2) First, his factory takes out the oils from the used …
END_OF_DOCUMENT_TOKEN_TO_BE_REPLACED 1