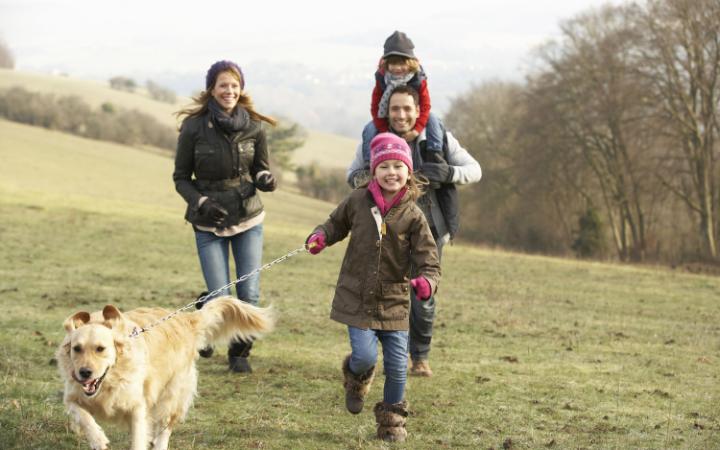 (P1) One in ten British parents say owning a pet has helped their child lose weight, while nearly half say their child is FITTER and healthier because they own a dog or a horse, according to a study.

(P2) The report also found that Brits have collectively lost an estimated 4 million STONE in weight thanks to the increased activity that comes from owning a pet.

(P3) Recent research supports this: it found that owning a dog could help lower the risk of childhood OBESITY, as dog-owning families take part in more physical exercise and are less SEDENTARY.

(P4) Dr Carri Westgarth pointed to walking and playing with dogs as reasons why there is a clear correlation between dog ownership and improved fitness, adding that this trend isn’t seen with any other type of pet.

(P5) She said: “Generally, when looking at the population as a whole, if you own a dog you are more physically active, and this goes for children as well, in terms of increased physical activity levels.”

(P6) As well as improving their fitness, the study also found that pets help children’s MENTAL HEALTH, with three quarters of parents saying that owning a pet has improved their child’s ANXIETY.

(P7) Dr Maeve Moorcroft said: “One of the great things about a childhood pet is the strong bond that can develop.

(P8) “You can turn to them for comfort when you are upset or frightened, and the pet will never tease you or laugh at you or reveal your secrets. There will be no fights with your pets.”

(P9) Owning and caring for an animal also has positive effects on children’s behaviour, with 58% of parents saying their children have become more responsible since bringing an animal into the home.

(P10) Over a quarter of Brits say having a pet has improved how their child behaves, while two thirds of parents whose children have behavioural issues said their child has shown improvement thanks to the support of a pet.

(P11) A tenth of parents in the study, which surveyed over 4,000 people, also attributed an improvement in their child’s schoolwork to owning an animal.

(P12) More than three quarters of parents say that pet care and ownership is so essential to a child’s development that it should be taught as part of the national CURRICULUM.

Weekly_ArticleNovember 8, 2015
[ENVIRONMENT ★★] SOUTH AFRICA IN MIDST OF EPIC DROUGHT (P1) South Africa is facing its worst DROUGHT since 1982, with more than 2.7 million HOUSEHOLDS facing water SHORTAGES across the country, the government has said. (P2) Lennox Mabaso, spokesperson for the …
END_OF_DOCUMENT_TOKEN_TO_BE_REPLACED 1

Weekly_ArticleMarch 13, 2016
[SPORTS ★★] IS JORDAN SPIETH DONE WITH SOCIAL MEDIA? (P1) World number one golfer Jordan Spieth blamed a Twitter TIRADE at his CRITICS on FRUSTRATION and BOREDOM. (P2) The 22-year-old American, defending CHAMPION at this week’s event just as he will be at …
END_OF_DOCUMENT_TOKEN_TO_BE_REPLACED 1

Weekly_ArticleJune 29, 2016
[World News ★] (P1) June 21st is International Yoga Day. 30,000 people in India did yoga on that day. One of them was the Indian Prime Minister, Narendra Modi. (P2) He told the world to embrace yoga because it helps people connect with …
END_OF_DOCUMENT_TOKEN_TO_BE_REPLACED 1

Weekly_ArticleNovember 28, 2015
[WORLD NEWS ★★★] MINING DISASTER IN MYANMAR   (P1) Hopes FADED on Monday that any of 100 people missing would be found alive after a LANDSLIDE in northern Myanmar buried an ENCAMPMENT near a JADE MINE, and officials said it was …
END_OF_DOCUMENT_TOKEN_TO_BE_REPLACED 1