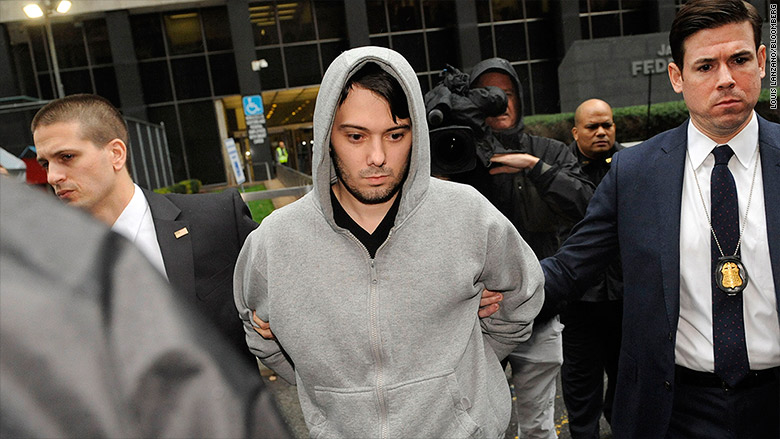 (P1) Martin Shkreli, the boyish entrepreneur who caused a public UPROAR after he DRASTICALLY raised the price of a life-saving PRESCRIPTION DRUG, was arrested on Thursday for engaging in what U.S. prosecutors said was a PONZI SCHEME at his former HEDGE FUND and a PHARAMACEUTICAL company he previously headed.

(P2) Shkreli, who has become a LIGHTNING ROD for growing OUTRAGE over SOARING prescription drug prices, was arrested before dawn in midtown Manhattan. Dressed in a grey hoodie, the 32-year old could be seen being led by LAW ENFORCEMENT officials.

(P3) It was a dramatic TURN OF EVENTS for Shkreli, who in recent months became a PARIAH for his controversial remarks in the press and on social media outlets.

(P4) Many on social media said Shkreli was getting what he deserved. A feeling of SCHADENFREUDE was WIDESPREAD. But Shkreli’s DOWNFALL was not related to expensive drug pricing.

(P5) Shkreli, who is currently CEO of Turing Pharmaceuticals and KaloBios Pharmaceuticals, was charged in a federal INDICTMENT relating to his management of hedge fund MSMB Capital Management and bio-pharmaceutical company Retrophin Inc.

(P6) Brooklyn U.S. Attorney Robert Capers said at a news conference that Shkreli “ESSENTIALLY ran his companies like a Ponzi scheme, where he used each subsequent company to pay off investors in the prior company.”

(P7) Authorities HIGHLIGHTED what they called the “BRAZENNESS” of his actions. Shkreli’s efforts to conceal the FRAUD led him to use the assets of Retrophin to pay off debts from his hedge funds, Capers said.

(P8) Shkreli was charged with fraud and CONSPIRACY. The maximum sentence for the top count is 20 years in prison.

(P9) “Mr. Shkreli is confident that he will be cleared of all charges,” his representative said.

(P10) The indictment, the result of an ONGOING investigation, also charged Evan Greebel, a former partner at law firm Katten Muchin Rosenman who was Retrophin’s OUTSIDE COUNSEL. Greebel, 42, was also arrested on Thursday.

(P11) Shkreli and Greebel entered PLEAS of NOT GUILTY through their lawyers.

(P13) The securities fraud investigation PREDATED a separate controversy surrounding Shkreli since September, when he raised the price of the prescription drug Daraprim from $13.50 to $750 a tablet.

Pokemon Go is the next big thing

Entertainment, Weekly_ArticleJuly 14, 2016
[Entertainment ★★★] (P1) Nintendo has released an app that everyone is talking about. It is an augmented reality game called Pokemon Go. Players walk around the real world to get imaginary creatures called Pokemon (pocket monsters). The app will soon overtake …
END_OF_DOCUMENT_TOKEN_TO_BE_REPLACED 2

STRESSED-OUT MEN ARE LESS LIKELY TO BE LEADERS

Business, Weekly_ArticleSeptember 5, 2015
[BUSINESS ★★] STRESSED-OUT MEN ARE LESS LIKELY TO BE LEADERS (P1) You probably have some ideas about how your company’s CEO got to where he did. (P2) Maybe he’s a CHARISMATIC EXTROVERT, able to charm his way through any important meeting. …
END_OF_DOCUMENT_TOKEN_TO_BE_REPLACED

Weekly_ArticleJune 22, 2016
[World News ★★] (P1) Across Venezuela, food riots and looting are a daily practice and a big problem for the government. Venezuelans stand in lines for food for hours, but when they get to the end, sometimes there is nothing left. (P2) Oil markets finance the supermarkets, …
END_OF_DOCUMENT_TOKEN_TO_BE_REPLACED 1