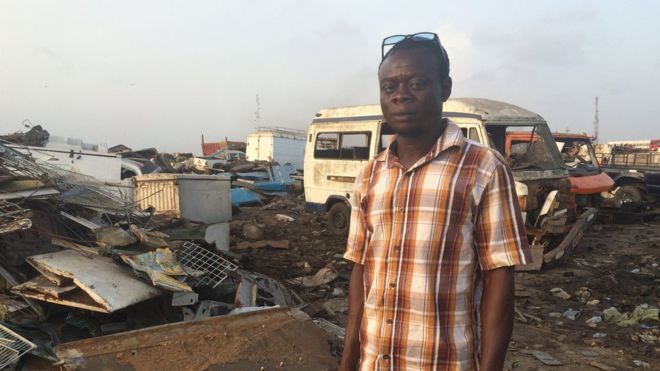 (P1) At a vast dumpsite in the west of Ghana’s capital Accra, small fires burn among piles of old computers, television screens, and laptops.

(P2) This is one of the biggest dumps for electronic waste in the world, and among the most polluted places on earth.

(P3) Every year hundreds of thousands of tons of e-waste find their way here from Europe and North America, where they are stripped of their valuable metals.

(P4) For many it’s a LUCRATIVE business in a country where nearly a quarter of people live below the POVERTY LINE.

(P5) “It’s an instant job,” said Sam Sandu, a scrap dealer who works on the site. “Today you work on it, and you can get your money the same day.”

(P6) But experts warn the TOXINS present in the waste are slowing poisoning the workers, as well as spreading pollution into the soil and atmosphere.

(P7) “Mercury, lead, cadmium, arsenic – these are the four most toxic substances [in the world], and these are found in e-waste residues in very large quantities,” explains Atiemo Sampson, an environmental researcher at the Ghana Atomic Energy Commission.

(P8) There is little data yet on the numbers of people who have fallen ill or even died as a result of working with e-waste.

(P9) But exposure to these toxins are known to cause a whole range of illnesses from cancers to heart disease to respiratory illnesses.

(P10) “The consequences are already quite apparent,” says Atiemo Sampson. “We are not waiting for 10 years or 20 years, the effects are already happening within the Ghanaian community.”

(P11) Analysts estimate the world will produce 93 million tons of e-waste this year alone – an ever-growing volume that is the result of the DISPOSABILITY of many high-end electronic products.

(P12) Much of it will find its way to a handful of e-waste dumps in Africa and Asia, rather than being RECYCLED in the country in which it was sold.

(P13) Atiemo Sampson believes electronics producers have a responsibility to help clean up the mess their products helped create.

(P14) “Across the world there is a growing acceptance that the producer of the equipment must bear responsibility for ‘end of life’ management,” he says.

(P15) “They should be investing in collections systems, in recycling systems in Africa. It is morally right and legally right.”

(P16) But the e-waste at sites like Agbogbloshie continues to pile up.

(P17) Experts like materials scientist Hywel Jones of Sheffield Hallam University in the UK says the solution to the e-waste problem is complex.

(P18) His ‘What’s In My Stuff?’ project aims to educate the public about the materials found in a typical smartphone. Since smartphones look “clean,” consumers believe they are clean – but they really are not.

(P19) Jones says companies and governments need to be involved too.

(P20) “Two billion mobile phones are manufactured every year – more than 15 billion manufactured since 1994, and that’s not counting cameras, laptops and televisions,” he says.

(P21) “We have an enormous problem and we’re starting very LATE IN THE DAY to fix it.”

Business, Weekly_ArticleJanuary 17, 2016
[BUSINESS ★★] HOW TO START A WHISKY DISTILLERY (P1) Considered by most AFICIONADOS to be the PINNACLE of the industry, SINGLE MALTS are WHISKIES made from a single DISTILLERY. (P2) They typically command a PREMIUM PRICE over BLENDED WHISKIES. (P3) Whisky …
END_OF_DOCUMENT_TOKEN_TO_BE_REPLACED 1

Technology, Weekly_ArticleSeptember 9, 2016
[Technology ★★★] (P1) This year’s iPhone, revealed Wednesday, is seen as a more modest upgrade, as several analysts noted that it was increasingly difficult to make impressive changes in hardware, the AP reports. Among Apple’s biggest changes are nixing the headphone jack and …
END_OF_DOCUMENT_TOKEN_TO_BE_REPLACED 1

★★★★, Weekly_ArticleJanuary 2, 2017
[Education ★★★★] (P1) International students seeking a medical degree in the United States face serious stumbling blocks. First, there is often a language barrier. Students from non-English speaking countries could have a hard time understanding their work or communicating with …
END_OF_DOCUMENT_TOKEN_TO_BE_REPLACED 1

Weekly_ArticleJanuary 18, 2016
Chapter 4-1: The Guests Aim: In this 30-minute lesson, you will go over the part 4-1 of the book. Go over comprehension questions after each paragraph, and practice using new expressions. After saying hello, read the following part of the …
END_OF_DOCUMENT_TOKEN_TO_BE_REPLACED