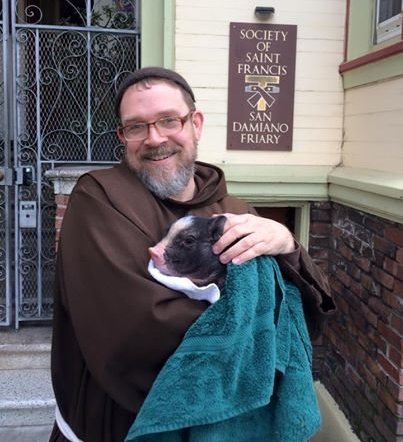 (P1) A RUNAWAY PIGLET that was chased by nearly a dozen strangers down a San Francisco street was seen safe in a FRIAR‘s arms after her CAPTURE outside a FRIARY DEDICATED to the PATRON SAINT of animals, St. Francis.

(P3) Brother Damien Joseph said he ran outside when he heard there was a piglet running around the NEIGHBORHOOD.

(P4) He described the chase as lasting around 15 or 20 minutes and involving a suited businessman and a construction worker.

(P5) The businessman called a co-worker on his cell phone and said, “I’m going to be late. I’m chasing a pig.”

(P6) Brother Damien said that a construction worker caught the little female pig, which may be someone’s pet.

(P7) “She made quite the SQUEAL when she got caught!” he said. FORTUNATELY, wrapping her in towels seemed to calm her.

(P8) “The response of total strangers to protect this tiny helpless animal was HEARTENING,” the friar said.

(P9) No one has yet COME FORWARD to claim the piglet, Deb Campbell of the city’s Animal Care and Control department said.

(P10) The piglet is described as healthy, well fed, shy, and “really fast.” She is also LITTER BOX trained.

(P11) Campbell said many calls have come from the public asking if they can ADOPT her. Whoever owns her has five days to claim her before an adoption can happen.

(P12) One way or another, Campbell said, “it sounds like she’s going to have a great life!”

Weekly_ArticleMarch 12, 2016
[ENVIRONMENT ★★★] HONDURAS REMEMBERS ENVIRONMENTAL ACTIVIST BERTA CACERES (P1) A large crowd in Honduras ACCOMPANIED the body of Berta Cáceres to its FINAL RESTING PLACE amid calls for JUSTICE over this week’s killing of the INDIGENOUS leader and ENVIRONMENTAL ACTIVIST. (P2) Many of those …
END_OF_DOCUMENT_TOKEN_TO_BE_REPLACED 1

When do I use “neither” and “either”?

Q&A, UncategorizedFebruary 28, 2020
Using the words “neither” and “either” can be confusing for many students, but in this short lesson, I will teach you how to use these words with confidence. We use both “neither” and “either” when comparing options. We use “neither” as a negative, to indicate that …
END_OF_DOCUMENT_TOKEN_TO_BE_REPLACED 89

Weekly_ArticleAugust 23, 2016
[World News ★★★] (P1) Germany doesn’t want its citizens to panic—but it would like them to be a little more prepared for an attack or a disaster. According to a report in the Frankfurter Allgemeine Sonntagszeitung, the German government plans to bring …
END_OF_DOCUMENT_TOKEN_TO_BE_REPLACED 1