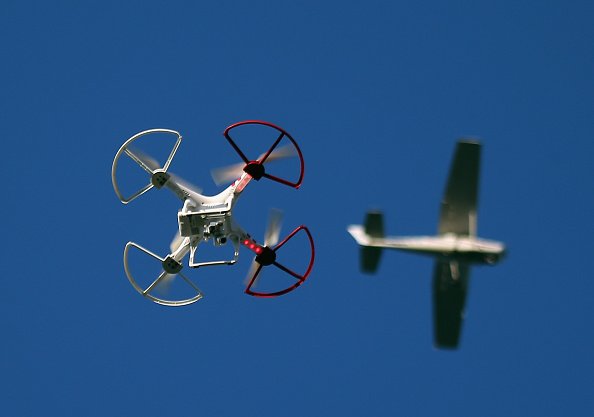 (P1) Drones are entering RESTRICTED airspace and flying dangerously close to airplanes and HELICOPTERS, with the Federal AVIATION Administration (FAA) reporting hundreds of drone incidents during the past six months.

(P2) Among the incidents listed in a new FAA report that runs from August 2015 to January 2016 are several reports by airline pilots of “near misses” with drones.

(P3) In one incident in November, a helicopter departing the Children’s Hospital in Saint Louis had to TAKE EVASIVE ACTION to avoid a black drone. In another incident in August, a pilot flying at 7,000 feet near JFK airport reported seeing a black drone passing by in the opposite direction, a mere 20 feet to the right of the aircraft.

(P4) Consumer drones have become increasingly popular , and tech companies including Intel, GoPro and Samsung are racing to CASH IN ON the trend. Amazon and Google are developing drones they hope could bring packages directly to customers’ homes.

(P5) But the PROLIFERATION of drones is raising all sorts of new safety and security concerns, particularly as drones fly into parts of the sky that are subject to strict AIR TRAFFIC CONTROL systems.

Weekly_ArticleAugust 29, 2015
[ENVIRONMENT ★] CAN DINOSAURS BE BROUGHT BACK? (P1) When it comes to making movies, sometimes the natural limits of science must be stretched to CAPTURE THE IMAGINATION of the audience. This is something PALEONTOLOGIST Jack Horner understands very well. (P2) Horner …
END_OF_DOCUMENT_TOKEN_TO_BE_REPLACED 1

Business, Weekly_ArticleSeptember 20, 2015
[BUSINESS ★★] CORPORATIONS NEED A HUMAN VOICE ON SOCIAL MEDIA (P1) For companies, behaving like an actual human being on social media is dangerous. Tightly control your company’s voice on Twitter and Facebook with endless rules, regulations, and procedures and the …
END_OF_DOCUMENT_TOKEN_TO_BE_REPLACED

Health, Weekly_ArticleOctober 5, 2016
[Health ★★★] (P1) Watching sad movies can be just what the doctor ordered. A study shows that sad movies may boost our tolerance to pain. Researchers say that sad movies can increase the number of endorphins released by the brain. …
END_OF_DOCUMENT_TOKEN_TO_BE_REPLACED 1