As You Pick a Netflix Flick, Netflix Watches You 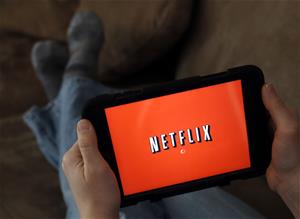 (P1) Netflix wants you to watch more Netflix. To that end, the company has been testing how the cover art that accompanies a movie or TV show influences a viewer’s decision to ultimately watch it, the Daily Dot reports. Netflix figures it has about 90 seconds to capture your attention before you lose interest in watching a movie, writes the company’s Nick Nelson in a blog post and the best way of doing that is through images (which, a previous study found, is where watchers put 82% of their focus). “Imagine having to tell your friend about the last movie you watched through a single drawing on the back of a playing card,” writes Nelson.

(P2) Users spend only about 1.8 seconds assessing a title presented to them, and Netflix has gleaned some insights into what works. (Read a technical post on the undertaking here.) Highlights:

People, Weekly_ArticleMay 13, 2016
[People ★★★] (P1) Rodrigo Duterte, the bombastic mayor of a major southern city, was heralded Tuesday as president-elect of the Philippines after an incendiary and populist campaign that projected him alternatively as an emancipator and a looming dictator, the AP …
END_OF_DOCUMENT_TOKEN_TO_BE_REPLACED 1

Opinions, Weekly_ArticleJuly 24, 2015
[OPINION ★★] PEOPLE, NOT TECHNOLOGY, ADVANCE CHANGE (P1) We live in a time of both BREATHTAKING technological surprise and UNNERVING global challenges. The result is that we are chattering away on our increasingly technologically sophisticated smart-phones, and social media platforms, about …
END_OF_DOCUMENT_TOKEN_TO_BE_REPLACED 1