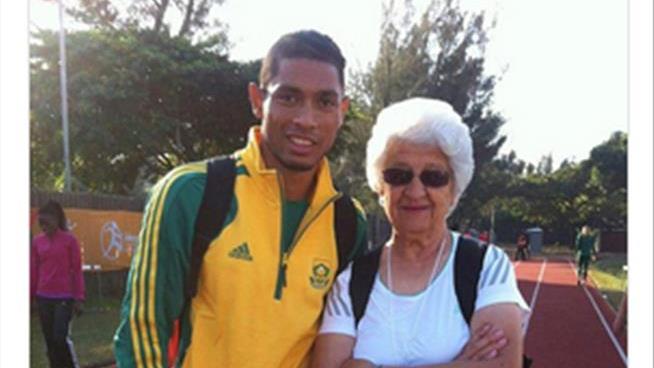 (P1) South African sprinter Wayde Van Niekerk set a world record Sunday night in the men’s 400-meter race. It’s an Olympic feat that the Washington Post says, “no one saw coming” except, perhaps, for the 74-year-old Namibian great-grandmother who trains him. Van Niekerk first caught the eye of Ans Botha, who’s been a track and field coach for half a century, at 2010’s IAAF World Junior Championships. She started coaching him two years later, Quartz notes. He’s managed to get four seconds faster in the 400-meter competition since she took over his training regimen.

(P2) His success may be due to the no-nonsense approach that is taken by Botha, known as “Tannie Ans” (“Aunt Ans” in Afrikaans) in the running world. “When I first met her, I was afraid of her,” fellow South African runner Akani Simbine tells the Post. He says she becomes “loving” once you get to know her. “When the track workouts need to be done, she makes sure you get them done.” Van Niekerk credits the silver-haired septuagenarian for how far he’s come, saying after his big win that “she’s played a huge role in what I am today,” per Fox Sports. “She’s really kept me very disciplined and very focused on the goal.”

Business, Weekly_ArticleAugust 17, 2016
[Business ★★★] (P1) U.S. authorities say Latin America’s largest airline has agreed to some $22 million in civil and criminal fines in connection with a scheme to pay bribes to end a labor strike in Argentina a decade ago. (P2) Chile-based …
END_OF_DOCUMENT_TOKEN_TO_BE_REPLACED 1

★★★★, Culture, Weekly_ArticleNovember 8, 2016
[Culture ★★★★] (P1) On October 3, 1863, with the nation embroiled in a bloody Civil War, President Abraham Lincoln issued a proclamation setting aside the last Thursday in November as a national day of thanks, setting the precedent for the …
END_OF_DOCUMENT_TOKEN_TO_BE_REPLACED

★★★★, Health, Weekly_ArticleDecember 15, 2016
[Health ★★★★] 1. Eat a Variety of Foods You need more than 40 different nutrients for good health and no single food can supply them all. Today’s food supply makes it easy to eat a wide variety of foods whether …
END_OF_DOCUMENT_TOKEN_TO_BE_REPLACED

Life, Weekly_ArticleFebruary 28, 2016
[LIFE ★★] CHINA’S SEXUAL REVOLUTION (P1) Over the last 20 years, Chinese attitudes to sex have UNDERGONE a REVOLUTION – a process carefully observed, and sometimes ENCOURAGED, by the country’s first female SEXOLOGIST, Li Yinhe. (P2) “In the SURVEY I made …
END_OF_DOCUMENT_TOKEN_TO_BE_REPLACED 1