Waiter tipped $500 for his kindness 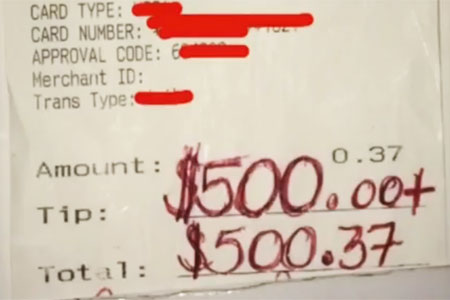 (P1) It seems kindness is still reciprocated and it is true that virtue is its own reward.

(P2) Kasey Simmons, a waiter at an Applebee’s restaurant in Dallas, Texas, found a $500 tip on a $0.37 bill on Aug. 16, according to CNN. The bill was accompanied by a message written on a napkin that told the heartwarming story behind the tip.

(P3) The previous day, Simmons was shopping at a local grocery store. In the checkout line, he saw an older woman who looked depressed. He walked up to her and tried to lift up her mood while other shoppers passed right by her. She didn’t explain why she was sad while he paid for her groceries. “It was only $17, but it’s not about the money,” he said. “It’s about showing someone you care.

(P4) The next day the grateful daughter of that woman came in and ordered the cheapest thing on the menu, flavored water, and wrote down on the napkin: “On one of the most depressing days of the year, you made my mother’s day wonderful.”

(P5) The day Simmons met the woman was one of the toughest days of the year for her. It was the third anniversary of her husband’s death, and she had been struggling to overcome her anguish.

(P6) “You insisted on paying. Told her she is a very beautiful woman. I have not seen this woman smile this much since dad died,” said the note.

(P7) The daughter didn’t let him know her mother’s name, but instead, let the world know that a simple kind gesture can have a priceless impact.

Weekly_ArticleAugust 31, 2016
[World News ★★] (P1) Colombians are happy because the government signed a peace deal with the rebel group FARC. It ends 52 years of fighting. Over 220,000 people died and millions lost their homes. There were two years of talks …
END_OF_DOCUMENT_TOKEN_TO_BE_REPLACED 1

What’s the past tense of the verb “text”?

Q&A, UncategorizedDecember 16, 2019
The word “text” usually referred to text written in a book and would be considered a noun. With the advancement of technology today, text can be used as a verb and the action to “text” refers to sending a text …
END_OF_DOCUMENT_TOKEN_TO_BE_REPLACED

NEW SOCCER STADIUM IN FRANCE IS AN UNUSUAL WORK OF ARCHITECTURE

Weekly_ArticleJune 19, 2015
[SPORTS ★★★] NEW SOCCER STADIUM IN FRANCE IS AN UNUSUAL WORK OF ARCHITECTURE (P1) The ARCHITECTURAL FIRM of Herzog & de Meuron has completed a MONUMENTAL new stadium in Bordeaux framed by 900 slim white COLUMNS, which will be one of the key VENUES for next year’s Euro …
END_OF_DOCUMENT_TOKEN_TO_BE_REPLACED 1

★★★, Weekly_ArticleJanuary 11, 2017
[Sports ★★★] (P1) A French cyclist has set a new record for riding 14 miles in one hour. If that doesn’t sound so remarkable, the world record is 33.8 miles, consider the category in which Robert Marchand was competing: over …
END_OF_DOCUMENT_TOKEN_TO_BE_REPLACED 1