All Passengers Freed From Hijacked Plane 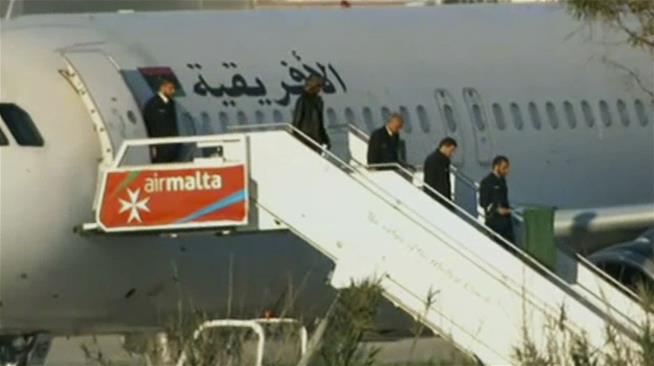 (P1) A hijacking drama unfolded on an airport tarmac in Malta Friday, but it ended without violence. It began when two hijackers commandeered an aircraft carrying 118 people in the skies over Libya and diverted it to the Mediterranean island, reports Reuters. Claiming to have a hand grenade, the hijackers threatened to blow up the Afriqiyah Airways A320, which had been en route from one Libyan airport to another. After a few hours of negotiations, and once the plane landed, the hijackers freed everybody on board, then turned themselves over to troops, reports the Times of Malta. Their motives remain unclear, but they appear to revolve around the late Libyan dictator Moammar Gadhafi.

(P2) The hijackers said they belonged to a group called Al Fatah Al Gadida, which is loyal to Gadhafi, and they had promised to release all passengers if their demands were met. Those demands haven’t been made public, though one unconfirmed report says they called for the release of Gadhafi’s son Saif, per Morroco World News. The Times reports it’s the first significant hijacking involving the country since 1985. On Nov. 23 of that year, an EgyptAir Boeing 737 plane was forced to land on the island. A 1986 People article about a survivor of the deadly incident reported 57 of the 92 passengers died during the rescue effort.

Weekly_ArticleJanuary 2, 2017
[Sports ★★] (P1) Cricket is a hugely popular sport in Pakistan, and there have been some incredible Pakistani cricket players. One of the all-time greats has to be the left-arm fast bowler and batsman Wasim Akram. Here are five fun …
END_OF_DOCUMENT_TOKEN_TO_BE_REPLACED 1

Office workers need one hour of exercise a day

Health, Weekly_ArticleAugust 3, 2016
[Health ★★] (P1) People who sit down a lot must exercise for one hour a day to live longer. Sitting down a lot makes our life shorter. It is like smoking or being overweight. Sitting for eight hours increases the …
END_OF_DOCUMENT_TOKEN_TO_BE_REPLACED 1

Weekly_ArticleSeptember 6, 2015
[TRAVEL ★★★] NEW ZEALAND’S NEVER-ENDING FIRE (P1) There are plenty of TROUT swimming through the rivers that SURROUND the ISOLATED New Zealand village of Murchison, and ANGLERS come from all over the world to TRY THEIR LUCK. But the trout don’t …
END_OF_DOCUMENT_TOKEN_TO_BE_REPLACED

Q&A, UncategorizedJanuary 11, 2020
Simply put, the question “what’s it like?” or “what is it like?” asks for a comparison or more details that help the other person understand someone or something better. Usually, the person asking the question has no information about the …
END_OF_DOCUMENT_TOKEN_TO_BE_REPLACED