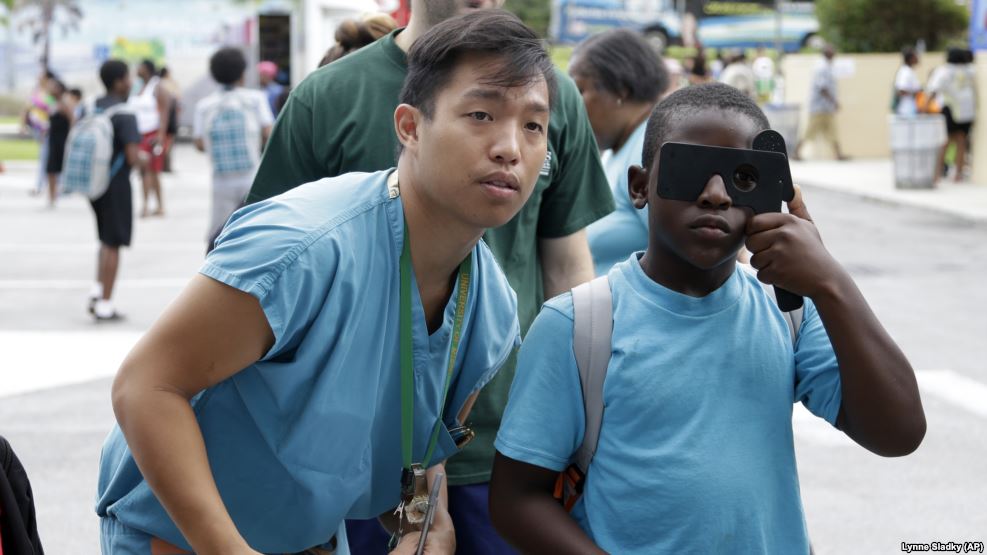 (P1) International students seeking a medical degree in the United States face serious stumbling blocks. First, there is often a language barrier. Students from non-English speaking countries could have a hard time understanding their work or communicating with professors.

(P2) Also, a medical education is very costly. First, students must complete an undergraduate degree. Then, most medical schools require at least four years of study. After medical school, students do at least three more years of training in their specific medical fields. They do receive some pay for this work. In addition, many medical programs at public universities in the U.S. do not accept international students. And private universities have fewer openings, creating a great deal of competition.

(P3) However, receiving a medical education in the U.S. is not impossible. Fatima Ismail is proof. The 32-year-old from Dubai says she knew she wanted to be a doctor at a very early age. “I was always fascinated by the brain and how it functions, and I love working with children. There is a huge population of children with developmental disabilities that are not taken care of very well in the Middle East in general and my home country, in particular.”

(P5) She says many of her fellow students applied to more than 10 or even 20 different programs. “It’s a very competitive process. Being an international medical school graduate, we have fewer chances to be accepted because the priority would be for the U.S. graduates. Having said that, it’s not impossible. All that you need to do is, basically, early planning.”

(P6) Planning is highly important for foreign students seeking admission to U.S. medical schools. Paul White is the director of medical school admissions at Johns Hopkins. He says some schools do accept students with undergraduate degrees from their home countries. But most, he says, require U.S. study. “So we say we want to see at least one year of additional coursework in any area in the U.S. just so we can see the kinds of courses they are capable of taking and how well they may perform in those courses. And there’s no question that if they do well in the U.S., and they do well on the medical college’s admissions test, then they’ll be eligible for admission.”

(P7) India native, Karum Arora, is in his fourth year of medical school at Johns Hopkins. He studies eye diseases. He also completed his undergraduate studies at Johns Hopkins, as well as a two-year research program in his field. Arora says the professors he knew in his earlier studies helped him gain acceptance to the medical school. “I can’t even express in words how great my mentors were during those two years. And they were at Hopkins as well, and they both supported me when I applied for med school, guided me through medical school, worked on projects, and are supporting me now as I apply for residency as well.”

(P8) School administrators suggest international students should apply to residency programs in the U.S. after completing medical school at home. Or they should begin their American medical education at the undergraduate level. But, officials say, even candidates with the strongest history of study will face fierce competition.

3 Reasons Why You Should Listen to Music at Work

★★★★, Health, Weekly_ArticleJanuary 2, 2017
[Health ★★★★] (P1) There are some obvious pros and cons to the open office space. For one, off-the-cuff collaboration is easier, but it’s often harder to focus. Since calls, meetings, and all kinds of conversation are happening in the open, …
END_OF_DOCUMENT_TOKEN_TO_BE_REPLACED 1

Weekly_ArticleNovember 1, 2015
[SPORTS ★] CRICKET TO BECOME OLYMPIC SPORT? (P1) All-time CRICKET greats Shane Warne and Sachin Tendulkar have called for TWENTY20 cricket to become an Olympic sport. (P2) Cricket has not been an Olympic sport since 1900, but the sport’s GOVERNING BODY …
END_OF_DOCUMENT_TOKEN_TO_BE_REPLACED 1

Weekly_ArticleAugust 29, 2015
[ENVIRONMENT ★] CAN DINOSAURS BE BROUGHT BACK? (P1) When it comes to making movies, sometimes the natural limits of science must be stretched to CAPTURE THE IMAGINATION of the audience. This is something PALEONTOLOGIST Jack Horner understands very well. (P2) Horner …
END_OF_DOCUMENT_TOKEN_TO_BE_REPLACED 1