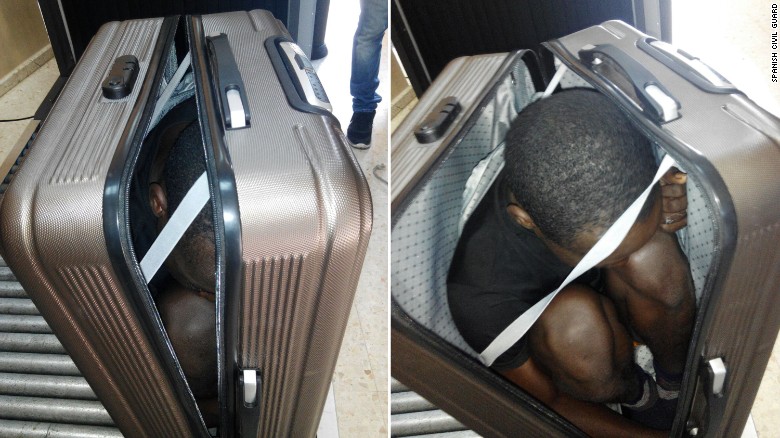 (P1) A young woman has been caught trying to smuggle a teenage African migrant hidden in her suitcase into Spanish territory.

(P2) Authorities stopped the 22-year old woman last week at a border crossing into Ceuta, one of two Spanish enclaves in North Africa, from neighboring Morocco.

(P3) A 19-year old migrant from Gabon was found concealed inside. The man was immediately offered medical attention due to the lack of oxygen inside the compact travel bag, Spain’s Civil Guard said in a statement.

(P4) Border control had become suspicious of the woman after they noticed she was carrying her luggage on top of a trolley, authorities added.

(P5) Spanish officials said the woman showed an “evasive attitude while going through the established controls and nervousness” while speaking to agents.

(P6) Ceuta along with the province of Melilla to the east, are Europe’s only land borders in Africa. Both enclaves have long been popular transit points for hundreds of sub-Saharan African migrants trying to cross the sea at the narrow point south of Spain.

(P7) This creative but dangerous method of concealment is one of several desperate approaches to illegal smuggling that the Spanish Civil Guard has faced in the past week on the Ceuta border.

(P8) Two migrants, a man and a woman from Guinea, were also rescued Monday after authorities discovered them hidden inside the dashboard and the backseat of a car, according to the Spanish Civil Guard.

(P9) The migrants were 20 and 24 years old, according to officials. The Moroccan man driving the vehicle, a Volkswagen, Golf, was arrested. The car had been stolen in Barcelona in 2015 and had fake Moroccan plates and registration documents, the statement added.

(P10) Meanwhile, at least 800 African migrants tried to storm a border fence into Ceuta from Morocco on New Year’s Day, according to the Spanish and Moroccan governments, Reuters reported.

(P11) Most of the migrants were prevented from entering Spanish territory. A handful of migrants scaled the six-meter high barbed wire fence, but were eventually helped down by cranes, Reuters reported. Dozens of Moroccan security forces were injured in the incident, along with five Spanish police officers.

White Rainbows Frequent Only 2 Places in the World

★★★, Science, Weekly_ArticleJanuary 5, 2017
[Science ★★★] (P1) Waterfalls are among the most reliable places to catch a rainbow, but only two on the planet offers up a regular display of its close cousin, the moonbow: Cumberland Falls in Kentucky and Victoria Falls on the Zambia-Zimbabwe border. …
END_OF_DOCUMENT_TOKEN_TO_BE_REPLACED 1

Weekly_ArticleFebruary 7, 2016
[ENVIRONMENT ★★] DEAL REACHED TO PRESERVE CANADA’S GREAT BEAR RAINFOREST (P1) The Canadian PROVINCE of British Columbia has announced a HISTORIC agreement that will protect the Great Bear RAINFOREST along its COASTLINE. The deal considers the interests of FIRST NATIONS, the …
END_OF_DOCUMENT_TOKEN_TO_BE_REPLACED 1

Weekly_ArticleSeptember 21, 2016
[World News ★★] (P1) A super typhoon hit Taiwan and brought severe rain. Winds of speeds up to 216 kilometers per hour blew things around the streets. (P2) Schools and businesses closed and 1,500 residents evacuated. Tens of thousands of homes were left without power. The …
END_OF_DOCUMENT_TOKEN_TO_BE_REPLACED 1