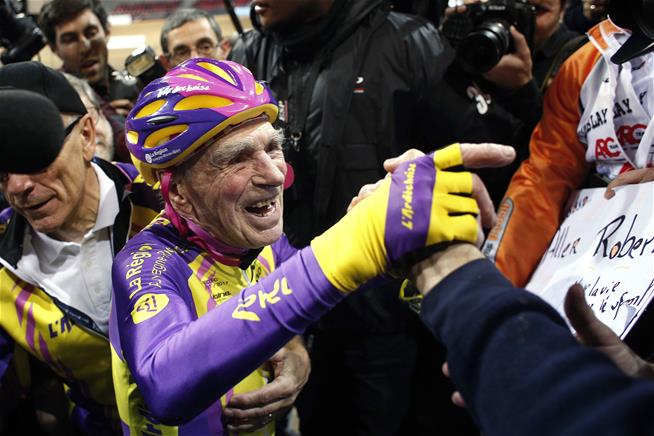 (P1) A French cyclist has set a new record for riding 14 miles in one hour. If that doesn’t sound so remarkable, the world record is 33.8 miles, consider the category in which Robert Marchand was competing: over 105. The retired firefighter did it the first time riding in under one hour in the over-100 category in 2012, then topped it two years later at age 102, the Guardian reports. He also holds the 100-plus record for fastest 100km (4 hours, 17 minutes). He turned 105 a few months ago and competed Wednesday in the new category created just for him. Marchand circled the Saint-Quentin-en-Yvelines velodrome near Paris 92 times with a crowd cheering him on.

(P2) Afterward, he was modest about his feat, telling BFMTV via the BBC that he “could have done better” but missed a sign telling him he had 10 minutes to go. He adds, “My legs didn’t hurt … My arms hurt, but that’s because of rheumatism.” Marchand, who cycles daily and once biked from Paris to Moscow, tells the AP he’s “now waiting for a rival.” Chips in his physiologist: “He could have been faster but he made a big mistake. He has stopped eating meat over the past month after being shocked by recent reports on how animals are subjected to cruel treatment.”

★★★, Lifestyle, Weekly_ArticleJanuary 11, 2017
[Lifestyle ★★★] (P1) Many people make resolutions during the New Year. A resolution is a firm decision to do something. The most popular New Year’s resolutions are losing weight, saving money, getting fit, and to stop smoking. About 45% of …
END_OF_DOCUMENT_TOKEN_TO_BE_REPLACED 2

Eight people on a motorbike

Culture, Weekly_ArticleNovember 23, 2016
[Culture ★★] (P3) A motorbike is designed for one or two people. However, it is possible to fit up to 8 people on a single motorbike as you can see in the photo above. (P3) A person in a car took a …
END_OF_DOCUMENT_TOKEN_TO_BE_REPLACED 1

Business, Weekly_ArticleFebruary 21, 2016
[BUSINESS ★★] WAL-MART IS NOT DOING WELL IN BRAZIL (P1) When Wal-Mart first expanded into the Brazilian city of Campo Grande seven years ago, the economy was BOOMING and executives were eager to open stores. (P2) It didn’t last. At the …
END_OF_DOCUMENT_TOKEN_TO_BE_REPLACED 1

Weekly_ArticleApril 9, 2016
[Food ★★] (P1) Meet the so-called King of Kebabs, the Royal. It’s new to London, and you can get a very good and very expensive kebab there. It costs 925 pounds and its creator says that it is worth every …
END_OF_DOCUMENT_TOKEN_TO_BE_REPLACED 1